After a testing few months for the Willie Mullins team, Nichols Canyon provided a welcome tonic by landing a second Morgiana Hurdle at Punchestown.

The six-year-old gelding, in the colours of Andrea and Graham Wylie, was somewhat of a shock winner in this very contest 12 months ago.

That day he beat none other than stable mate Faugheen, ending an unblemished record.

Nichols Canyon appeared in the lead coming to the first flight under Ruby Walsh, closely followed by the JP McManus-owned Jer’s Girl.

The two market rivals built up a healthy lead over the remainder headed by another Closutton hurdler, Sempre Medici.

With visibility poor, Nichols Canyon extended his advantage over Jer’s Girl after the third from home and was a long way clear after negotiating the last, winning by a bloodless 12 lengths.

Walsh remains undeterred by the changes happening around him, and certainly looks to have become more of a beneficiary. This second Grade 1 of the season for the 37-year-old follows hot on the heels of Valseur Lido’s win in the JNwine Champion Chase.

“He had a very hard race at Leopardstown last Christmas against Identity Thief and that might have left a mark for the rest of the season, but he was very good today,” reflected Walsh.

“He doesn’t get the credit he should. He jumped to his right in America and at Aintree, but he was straight today.”

The son of Authorized – a former inmate of the John Gosden yard as a two and three-year-old – now makes it an impressive seven Grade 1 wins over hurdles.

Mullins’ dominance of this two mile contest goes on unabated. The great Hurricane Fly won three consecutively between 2012 and 2014, with this year’s winner providing him with the six in a row.

Mullins said: “I’m very pleased. He had to come in as a sub, but he did it nicely. Ruby said they went a very good gallop the whole way and his stamina just won out.”

“Jer’s Girl decided to take him on early and he just kept galloping with her and he just outstayed her. He’s just got lots of stamina and once it became a test of stamina the conditions suited him more than any other horse in the race,” he added. 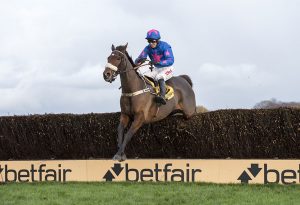 Up Next
Cue the Betfair hero