The Queen had her first ever runner in Canada

As an owner, the Queen has seen her royal colours compete in far-flung places around the world. For the first time ever, Her Majesty’s silks were on show in Canada, as Dartmouth lined up for the $1 million Pattison Canadian International Stakes at Woodbine.

First inaugurated in 1938, the mile and a half Grade 1 contest has been gradually dominated by the Europeans who have hauled the previous six running’s.

Erupt, a four-year-old son of Dubawi, made it seven wins in succession for Europe. He becomes the first French winner of the race since Sarah Lynx took the honours in 2011 for Christophe Soumillon and John Hammond.

In what can only be described as a pedestrian gallop set by World Approval, Stephane Pasquier had Erupt positioned fourth behind Sir Michael Stoute’s Dartmouth from a wide berth.

As the field turned into the stretch, Pasquier kicked for home with two furlongs to go and his mount showed a potent turn of foot to pass The Queen’s four-year-old, hitting the lead a furlong out.

The duo kept on well to secure victory by an untroubled length at the winning post, Darmouth and Chad Brown’s Wake Forest filling the places in behind.

Erupt has now provided his very much young, up-and-coming trainer Francois-Henri Graffard with two victories at the highest level. His stable star owned by the famous Niarchos family, gave him his first Group 1 just over 15 months ago when he ran out a convincing winner of the Grand Prix de Paris at Longchamp.

Pasquier was seen in Britain just over 24 hours earlier when bidding for Group 1 glory aboard Signs Of Blessing in the Qipco Champions Sprint Stakes. That very horse provided him with his other highest level success of the season when making all in the Prix Maurice de Gheest at Deauville.

A first runner for the Queen in a country close to her heart, the Hardwicke Stakes winner certainly didn’t disappoint her, putting up another fine performance three runs on from that magical moment at Royal Ascot back in June.

The spearhead of this year’s European challenge came from Ballydoyle in the shape of Derby third, Idaho. Bidding to reverse his fortunes from the St Leger last time out, he was positioned towards the rear by Ryan Moore.

The three-year-old son of Galileo could never make any impression on the leaders making moderate headway late on, with former Melbourne Cup hero Protectionist facing a similar fate.

E.P. Taylor Stakes
Five European challengers looked to hold all the aces in this year’s renewal of the Grade 1 contest over a mile and a quarter.

The £147,000 first prize has gone back across the pond seven times in the past decade, but this time around the European’s headed by Ballydoyle’s Best In The World failed to make the desired impact.

In a race which turned into a messy affair, American challenger Al’s Gal got the better of Juddmonte’s Suffused by the narrowest of winning margins in the final half furlong. Michael Maker’s mare went down fighting to Sea Calisi in the Grade 1 Beverly D.Stakes back in August and now tastes her first success at the highest level.

Banzari fared best of the European challenge running into a close third for Henri-Francois Devin and jockey Alexis Badel. The former Michael Bell-inmate was three places ahead of John Gosden’s Swiss Range and Roger Varian’s Nezwaah, the latter finding herself on the rail from a wide draw.

A well-supported favourite, Best In The World was nicely positioned under Moore but weakened in the final furlong to finish last of the 12-strong field. 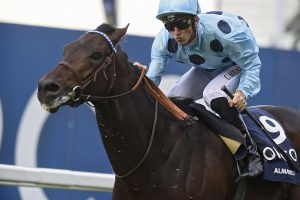 Up Next
Imperious Almanzor steals the show