Last winter, fans of Flat racing were kept warm by thoughts of the return of Frankel, the champion two-year-old of 2010. The son of Galileo hasn’t put a foot wrong this season and he will prove a hard act to follow.

During a season which has perhaps been short of two-year-old stars, one shines brighter than all others courtesy of a breathtakingly easy victory in the Racing Post Trophy: Camelot.

His will be the name thrown about when debate rages as to next year’s Classics. Is he a Guineas horse, a Derby horse or even, whisper it, a Triple Crown horse? Whatever he turns out to be, the manner of his most recent victory stands him apart from his contemporaries as a colt of exceptional talent.

Such a high-profile juvenile can only help Camelot’s sire Montjeu to emerge from the shadow of his most illustrious stud mate, Gaileo. A stallion who has sired three Derby winners, three Irish Derby winners and four Racing Post Trophy winners should be more lauded than he is but the champion sire sets such a fierce pace that it is impossible for even top-class rivals to compete.

Though he trails Galileo by more than £2 million in the stallion table, Montjeu has enjoyed a tremendous year, with race results from the last month being particularly worthy of praise. Another of his two-year-olds, Wading, also put herself very much in the frame for next season’s Classics when winning the Rockfel Stakes at Newmarket. Her pedigree dictates that she will not go unnoticed as she is out of Urban Sea’s daughter Cherry Hinton, and Wading bears all the encouraging hallmarks of her high-flying relatives.

Among Montjeu’s older campaigners are the good fillies Miss Keller and Sarah Lynx, each of whom won a Grade 1 at Woodbine on October 16, and the Ascot Gold Cup winner Fame And Glory, who showed an impressive return to form on British Champions’ Day to win the Long Distance Cup (Jockey Club Cup) at Ascot.

Montjeu enjoyed a St Leger double on September 10 when Nathaniel triumphed at Doncaster and Jukebox Jury dead-heated with Duncan in the Irish equivalent, while down under, the former British-trained Green Moon produced a career-best performance to finish runner-up in the Caulfield Cup. Green Moon and Jukebox Jury will now meet in the Melbourne Cup next Tuesday.

Despite having shuttled to New Zealand for several seasons, Montjeu was never really given his due regard by southern hemisphere breeders. Success in Australia’s most famous race would surely help to change that. 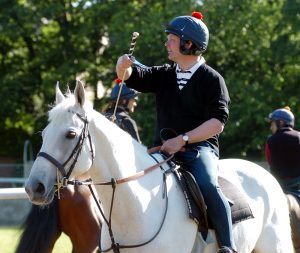 Up Next
Beaten Up takes giant leaps for Frog