Nicky Henderson was celebrating yet another Champion Hurdle victory as Buveur D’Air ran away with the prize in the second colours of JP McManus.

The son of Crillon was held up on the heels of the leaders in the early stages in the hands of Noel Fehily.

Gigginstown’s Petit Mouchoir led his ten rivals down the hill to the second last as the field grouped up, while just in behind Moon Racer was pulled up by Tom Scudamore.

Buveur D’Air came upsides the leader travelling well and Fehily kicked him ahead after the turn in. A fluent leap at the last saw him maintain a healthy advantage over his pursuers and he crossed the line four-and-a-half lengths up on stable mate My Tent Or Yours.

Third in the Supreme Novices’ 12 months ago, Buveur D’Air began his season with two wins in novice chase company at both Haydock and Warwick. He was switched back to hurdles last time out in the Contenders Hurdle at Sandown where he ran out an impressive winner in rain softened ground.

“Early on I felt I was doing too much and I thought it took me a while to get him switched off,” reflected Fehily.

A one-two for the Seven Barrows handler has meant that he has taken his tally to six in the races history. His first three came consecutively with See You Then between 1985 and 1987.

Henderson said: “He was doing well over fences but I knew he had more to come.

“I wondered if I’d got it wrong [reverting to hurdles] but it’s proved the right thing to do and it’s worked on the day.”

Earlier in the afternoon, the Gordon Elliott-trained Labaik caused somewhat of a shock by landing the Sky Bet Supreme Novices’ Hurdle over two miles.

In the hands of the talented Jack Kennedy, the six-year-old son of Montmatre loomed up travelling strongly before the final flight. The grey gelding was pushed out to repel nearest challenger Melon on the run in to win by just over two lengths.

Red hot favourite Altior managed to get the job done in this year’s renewal of the Racing Post Arkle under Nico de Boinville.

The seven-year-old came under pressure on the home turn but was able to capitalise from the fall of long-time leader Charbel at the second last.

He stayed on well up the hill to secure victory by six lengths from the Malcolm Jefferson-trained Cloudy Dream. 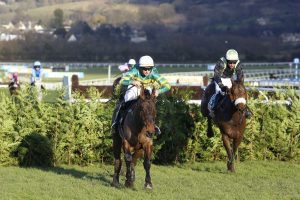 Up Next
Giles magic unnoticed