Karl Burke’s season seems to get better with every week and the trainer notched another significant success as Laurens captured the Group 1 Fillies’ Mile at Newmarket, just lasting home from September in a pulsating finish.

Laurens, adding to her game triumph in the Group 2 May Hill Stakes at Doncaster last month, was never far from the pace and kicked for home with a furlong to run under PJ McDonald, himself enjoying a terrific season. The Aidan O’Brien-trained September and Seamie Heffernan threw down a huge challenge but failed by a nose to catch the gutsy Laurens, with Magic Lily three-quarters of a length away in third.

It’s the two-year-olds that have led the way this year for the Burke stable, with Unfortunately winning the Group 1 Prix Morny and Group 2 Prix Robert Pappin in France, Havana Grey landing the Group 3 Molecomb Stakes at Glorious Goodwood and Ellthea taking the Group 3 Weld Stakes in Ireland.

The season could get ever better for the handler with top sprinting filly Quiet Reflection set to contest the Group 1 Sprint on British Champions Day at Ascot on October 21.

Paul Jacobs’ Limato bounced back to form in the Group 2 Challenge Stakes earlier on the card, recording a comfortable success under Harry Bentley for Henry Candy, while Altyn Orda broke her maiden tag in style, causing a 25-1 shock in the Group 3 Oh So Sharp Stakes for Andrea Atzeni and trainer Roger Varian.

Declan Carroll, who sadly lost promising juvenile Santry earlier this year, has an exciting two-year-old on his hands in the shape of Abel Handy, impressive winner of the Group 3 Cornwallis Stakes. 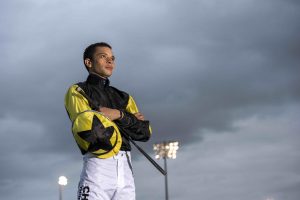 Up Next
Levey loving life