Son of Alleged, sire of the likes of Shantou Flyer, pensioned from stallion duties at the age of 27

Top-class National Hunt sire Shantou has been retired from covering duties at Burgage Stud in Ireland at the age of 27.

Shantou joined Victor Connolly’s operation in 2003, where he has spent 18 seasons, and has supplied the likes of Grade 1 winners Briar Hill, Death Duty, Morning Assembly and The Storyteller.

Speaking to the Racing Post, Connolly said: “We’re going to let him retire gracefully and enjoy his health for as long as he’s comfortable. He’s been wonderful and you couldn’t have asked for better but there’s a time when it’s the right thing to do as old age catches up with all of us.

“We’re just delighted that Shantou came our way. So many pedigrees that we’re involved in have improved thanks to him and it just goes to show you that a good stallion does so much for a stud.

“He had this amazing tenacity, a desire to win. He was a fairly tough individual as you’ll see from his racing days, he definitely had a mind of his own, but when he really applied it, he was triple Group 1 winner after all.

“He’s a bit of a street fighter, a bit of a tough guy, but if you dealt with him in the right way, he was always fine. I think he’s passed on that incredible toughness. There’s something good horses pass onto their progeny and you can’t explain it, it’s just this desire to finish in front of other horses.” 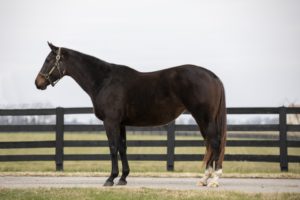 Up Next
Felicita tops Keeneland December Digital Sale at $250,000