Following prize-money agreements and a new lucrative all-weather series, more good news has come the way of British racing with the announcement by the Horserace Betting and Levy Board (HBLB) of the details of the 53rd Levy Scheme, with a significant boost in the form of an extra £4.5m contribution from a partnership of the four biggest bookmaker firms. This, in addition to Betfair’s estimated £7.8m contribution, produces a Levy yield for 2014/15 of £75.7m.

The four largest retail bookmakers – William Hill, Ladbrokes, Coral and Betfred – have agreed the same voluntary contribution to the Levy over a four-year period, which will see a total of £18m paid into a newly-created Incentive Fund from April 2014.

The fund will be managed by a new distribution group formed by representatives of the Levy Board, racing and the four contributing bookmakers. As part of the agreement with the British Horseracing Authority (BHA), the Racecourse Association (RCA) and the Horsemen’s Group, the four bookmakers have pledged to underwrite a combined contribution payable through the statutory Levy of not less than £47.5m per year, as well as the £4.5m additional voluntary contributions. Total income to the Levy Board from bookmakers in 2014/15 is estimated to reach £80.2m.

Speaking on behalf of racing’s stakeholders, BHA Chief Executive Paul Bittar commented: “This arrangement has the support of the principal organisations in the sport, including the Racecourse Association and Horsemen’s Group, and represents a positive step forwards in the prevailing circumstances. We are pleased to reach an early Levy settlement, and in turn trigger a significant additional voluntary contribution from the big four retail operators for the next four years. This additional funding, coupled with a continuation of the underwrite, brings a degree of certainty and considerable upside in the coming years, and we would like to place on record our appreciation towards the big four bookmakers and the Levy Board in helping us reach this arrangement.

“Importantly, the arrangement places the emphasis on joint efforts with the betting industry to make the racing product even more compelling, and competitive year-round. We look forward to working with the big four bookmakers to put the new Incentive Fund to best use, and grow Levy income further.”

A statement issued on behalf of William Hill, Ladbrokes, Coral and Betfred, read: “We are delighted to have reached an arrangement with racing, which will see the biggest four bookmakers in Britain inject an additional £18m into British Racing over the next four years. This addition to our normal statutory Levy payments will ensure that the four companies underwrite a minimum £52m per year to the Levy Board.

“British Racing is a core product in our betting offices and we want to see it grow and thrive. The £18m will be used to improve the competitiveness of the racing product, making it more appealing to both racegoers and betting office customers alike. We look forward to working closely with our colleagues from Racing over the next four years and maintaining, and enhancing, Britain’s status as the number one horseracing nation in the world.” 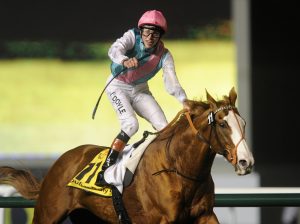 Up Next
Cityscape to join Overbury Stud roster