Further changes to the autumn Flat racing programme were unveiled on Tuesday with the announcement of a British Champions’ weekend worth £4.5 million in prize-money to be staged in 2014.

The Dubai Future Champions’ Day will be held at Newmarket on Friday, 17 October and followed 24 hours later by QIPCO British Champions’ Day at Ascot.

Each card will feature three Group 1 events, with the Fillies’ Mile being switched with the Rockfel Stakes to be run on the same day as the Shadwell Middle Park Stakes and Dubai Dewhurst Stakes, while the QIPCO British Champions Fillies’ and Mares’ Stakes has been upgraded to Group 1 status and, as has been the case for the last two years, will be run alongside the Queen Elizabeth II Stakes and Champion Stakes. The boosting in status of the Fillies’ and Mares’ Stakes means that it will be worth £500,000 in 2013 – double its previous value.

Like the Rockfel, the Cesarewitch will be removed from Future Champions’ Day and will be run six days earlier as the highlight of a £450,000 card at Newmarket. Racing on the Rowley Mile received a further boost with the news that the Group 3 Cornwallis Stakes is to be switched there from Ascot, while the Abernant Stakes, run at the Craven meeting in April, will be upgraded from Listed to Group class. These changes mean that Newmarket will stage more Group races than any other racecourse in Britain.

Amy Starkey, the East Regional Director for Jockey Club Racecourses and responsible for the running of Newmarket Racecourses, said: “I’m very pleased that Dubai Future Champions’ Day will increase its status as Europe’s two-year-old championship day by featuring three Group 1 races for the first time in 2014 and as part of a superb two-day climax to the premier Flat racing season.

“We have made this move in the best interests of British racing, working with multiple interested parties and listening to feedback from trainers who asked us to help resolve the outstanding issues with the two-year-old Pattern.

“Staging an additional fixture in the Saturday slot will see a further significant injection of prize money at Newmarket and we are very grateful for Dubai’s continued and highly valued support on Dubai Future Champions’ Day.” 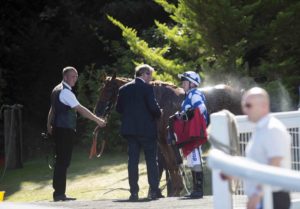 Up Next
Great Scot