Publication of the British Thoroughbred Breeding Economic Impact Study in September came hand in hand with the Thoroughbred Breeders’ Association’s blueprint for reversing the bleak financial fortunes of Britain’s breeders.

An alarming detail within the report highlighted that 66% of British breeders operated at a loss last year, as against 45% when a similar study was published four years earlier.

The TBA’s response is to propose the creation of a British Breeders Premium Scheme, for which it seeks funding of an additional £3 million from the Levy Board.

The scheme is the brainchild of TBA board member Brian Mayoh, who was the driving force behind the NH Mare Owners’ Prize Scheme (MOPS). It will reward the winners of 1,000 Flat races with prizes of up to £20,000, and some 1,900 jumps races with payments rising to £15,000.

This owners’ scheme has far bigger prizes than MOPS

In each case the winning owner will receive 80%, with the balance paid to the winning breeder. These payments come on top of prize-money.

Despite the late hour, Mayoh still believes the new incentive can be introduced next year, even though it has yet to win official backing from two of the sport’s stakeholders, the British Horseracing Authority (BHA) and the Racecourse Association (RCA).

“We have spoken to [BHA Chief Executive] Nick Rust and [BHA Chief Operating Officer] Richard Wayman, who have been very supportive,” Mayoh says.

“We have also presented the scheme to the RCA board. Our suggestion is that the RCA should be concerned about the long-term number of owners and horses in Britain.”

The inference from the high proportion of British breeders who traded unprofitably last year is that their numbers will dwindle further.

Potential ramifications further down the line

The report highlighted that 353 breeders – or 8% – have given up in the last five years. Any commensurate drop in foal production would have ramifications further down the line for field sizes in races, which is the basis for media rights payments – a key source of prize-money – made by bookmakers to racecourses.

A small National Hunt breeder – he was joint-breeder of Cheltenham Gold Cup winner Sizing John – Mayoh highlighted the success of MOPS, introduced in January 2016, as a barometer of the new scheme’s potential.

“MOPS has changed everything,” he says. “Suddenly you can win significant prizes in Britain, you can attract potential partners in the horse, you can potentially get training costs back. This owners’ scheme has far bigger prizes than MOPS.”

Like MOPS, the Plus 10 bonus scheme currently in operation will be phased out if the new scheme is introduced. There is provision within the Plus 10 scheme, which pays out £10,000 in designated races, for Irish-bred horses to win qualifying races in Ireland.

The exclusion of Irish-bred horses is likely to ruffle feathers across the Irish Sea, but Mayoh insists: “There is nothing to stop Ireland setting up its own Plus 10 scheme if they wish.

“Horse Racing Ireland already contributes to that, and even if the new owners’ scheme is introduced next year, Irish-breds will still win the Plus 10 bonus for the next two years. But you’ll win more in Britain if you’re British-bred.”

This new scheme has extra incentives for middle-distance horses

Mayoh continues: “The major point of the scheme is to try and incentivise people to buy British and feel more confident in the future of the industry by breeding to British stallions.

“It [the bonus payment] is also an opportunity to address known weaknesses in the racing and breeding programme. At the moment 69% of all races in Britain are run over less than ten furlongs; only 8% are run over more than 12 furlongs.

“This new scheme has extra incentives for middle-distance horses to try to redress that balance. In Plus 10, 80% of the bonuses are won by two-year-olds and the vast majority of those – 80% again – are over five and six furlongs. There’s a serious bias towards speed and precocity in Plus 10.”

The new scheme will fly only if the Levy Board sanctions the additional £3m required to finance the proposals over and above its existing commitments to Plus 10 and MOPS.

If we don’t do anything now, the situation will simply get worse

However, income from the betting industry seems certain to fall following the government’s pledge in May to reduce the maximum stakes on Fixed Odds Betting Terminals from £100 to £2 in 2020.

This is expected to usher in significant betting-shop closures, which would in turn impact on the volumes currently bet on British racing, and thus the levy yield.

But Mayoh is undeterred. “It is the major issue,” he argues. “In any given year there will always be issues and concerns. But if we don’t do anything now, the situation will simply get worse.

“The Levy Board has the funding to do this right now [from the capture of levy on remote betting, which is expected to generate upwards of £40m this year]. Will we have the necessary funds in three of four years’ time? That’s an issue we should face then. I believe we must take action now.” 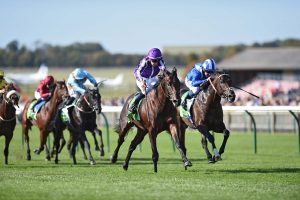