Hollywood Park’s Grade 1 Vanity Handicap, won three times between 2008 and 2010 by the great Zenyatta, went the way of a filly and a trainer who were both born in Britain, with Byrama landing the spoils for Simon Callaghan.

The four-year-old daughter of Byron was bred in Epsom by Tony and Lesley Smith’s Ermyn Lodge Stud from the Darshaan mare Aymara.

“As the racing business has expanded we’ve cut down on the number of broodmares and we have just four now,” said trainer Pat Phelan, who also manages the stud. “We sold Aymara to Coolmore and I know she has an Exceed And Excel colt foal this year, who is a full-brother to Klammer.”

A winner over a mile and a half when trained by John Gosden, Aymara had already produced the Group 3 Horris Hill Stakes winner Klammer, who was runner-up to Frankel in the Royal Lodge Stakes, while Byrama has added to that tally with victory in last season’s Manhattan Beach Stakes before finishing runner-up in the Grade 1 Madison Stakes at Keeneland prior to her top-level win on Saturday. Phelan, a former manager of Highclere Stud, bought her from a dispersal of the Duke of Devonshire’s stock.

He said, “She was carrying to Selkirk at the time but later I decided that some more speed was needed, so we used Exceed And Excel, Byron and Piccolo.

“As a small stud on the outskirts of London we’re very proud of what we’ve achieved with Klammer and Byrama.”

Byrama was initially sold privately as a foal to a client of Klammer’s trainer Jane Chapple-Hyam. Subsequently offered at the DBS Breeze-up Sale in 2011, she failed to find a buyer at £8,000 and was initially trained in the UK by Nigel Tinkler, for whom she won a five-furlong maiden at Carlisle before being exported to America.

Simon Callaghan, who took over the licence at Rathmoy Stables in Newmarket’s Hamilton Road on the retirement of his father Neville back in 2008, has wasted no time adjusting to the second phase of his training career in California, which commenced in January 2010.

Byrama’s victory was his fourth Grade 1 success, having twice won the Gamely Stakes with the British-bred fillies, Dubawi Heights and Belle Royale, while Dubawi Heights also won the Yellow Ribbon Stakes. Callaghan had previously worked in America for Todd Pletcher.

Byrama is the second Group/Grade 1 winner for Byron, a former member of the Darley stallion roster who now stands at Woodlands Stud in Co Galway. The son of Green Desert is also the sire of Prix de la Foret winner Gordon Lord Byron. 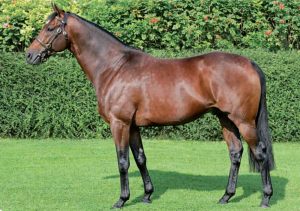 Up Next
Treve triumphs in Classic romp