By The Owner Breeder staff 10 September 2012

Gai Waterhouse, daughter of Sydney’s all-time greatest trainer (the late Tommy Smith) and now arguably the city’s most successful handler of the current era, spent plenty of time in England in her youth.

She initially set out as an actress and had several acting roles in the UK, both on stage and, most memorably, in Dr Who. She’s been back often since finally getting her trainer’s licence in the early 1990s – including to run Bentley Biscuit at Royal Ascot, Newmarket and Deauville in 2007 – but she must now be wondering why it took her so long to find her way to Tattersalls sales.

Glencadam in the ring where he was bought for 135,000gns ©Tattersalls

Waterhouse made her first foray to the horses-in-training sale last October and she will surely be back again this year following the recent successes of Glencadam Gold and Julienas, both of whom she bought, helped by McKeever Bloodstock, on the same day last year.

Glencadam Gold, a son of Refuse To Bend who fetched 135,000gns when sold out of Henry Cecil’s stable as the winner of two races including a 12-furlong three-year-old handicap at Newmarket in May 2011, has now won twice in Sydney including taking the Premier’s Cup, a Listed race run over 1800m at Rosehill on September 1.

He must have found this race very much a home-from-home experience: he headed a trifecta of imports, with second spot taken by the former Andre Fabre inmate Permit (a dual winner in France in 2010 who is now trained by Chris Waller) and third place filled by another Waller trainee, Stout Hearted, who raced as Seelo when trained by John Gosden for his breeder George Strawbridge.

Julienas, too, is now a stakes winner in New South Wales. Unlike Glencadam Gold, he landed his recent big win not in Sydney but in ‘the bush’: the son of Cape Cross took the Wyong Gold Cup on September 7. Formerly trained by Walter Swinburn for his father-in-law Peter Harris, Julienas won three races in England including, most notably, the Royal Hunt Cup in June 2011. Even at the time, the 75,000gns which he cost Waterhouse last October looked a bargain; he now looks to have been very well bought indeed. 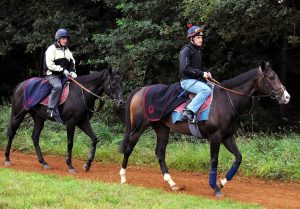