An export agreement for British-bred thoroughbreds has been agreed following a meeting in Newmarket on April 2 between Environment Secretary Owen Paterson and Chinese Minister for Import Controls Zhi Shuping.

With a fast-growing interest in horseracing in China, which last year saw the China Horse Club become big spenders at yearling sales in both hemispheres, the newly established Horse Protocol will soon allow for the export of equines from Britain to China, including sport horses as well as throughbreds.

Minister Zhi, who watched racehorses exercise on Warren Hill at Newmarket’s famous training grounds, as well as visiting Frankel at Banstead Manor Stud, said of the agreement: “Riding, breeding and training horses is increasingly popular in China, so this deal will ensure that we can make the most of the UK’s world-famous thoroughbreds in boosting our burgeoning equine industry.”

Environment Minister Owen Paterson added: “This deal will boost the UK economy by up to £10m, and once again demonstrates the value of our global reputation for high-quality exports. Through working in partnership with industry on export deals, we can secure great results for the British economy.”

The Thoroughbred Breeders’ Association’s Chief Executive Louise Kemble has already forged successful links with DEFRA and is looking forward to continuing that work in a bid to maximise Britain’e export opportunities.

“The export market for thoroughbreds from Britain is currently valued at £118 million annually,” said Kemble.

“Whilst the opportunity for thoroughbred trade with China is in its infancy, looking to the future the prospect of expanding this business meant that securing the export protocol was essential first step for our members, whilst also endorsing the findings of our Economic Impact Study.” 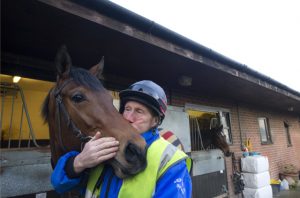 Up Next
George gets Lucky