Amy Murphy will start her new career as a trainer this week, based on Hamilton Road adjacent to Newmarket’s Rowley Mile racecourse.

The 24-year-old, who is the daughter of leading breeder Paul Murphy, will become the youngest in the training ranks in Britain but has an impressive background in the industry.

Born and raised at Wychnor Park Stud in Staffordshire, her father’s involvement in racing meant she rode ponies regularly as a young child and from the age of 16 started to ride out for local trainers.

Murphy enrolled at Harper College where she studied horse management for two years. During that time she rode out for the likes of Dr Richard Newland and Nicky Henderson, the latter responsible for training most of her father’s horses.

At 19 she made the move to join Tom Dascombe at Manor House Stables in Cheshire before moving to Australia to work for legendary trainer Gai Waterhouse.

Murphy said: “After Tom’s I thought it opportune to get some experience abroad as many trainers in this country have done. I had such a fantastic time at Gai’s and learnt an awful lot in such a short space of time.”

While in Australia, Murphy was offered the position of assistant trainer to Luca Cumani, which she grasped with both hands. Having started in March 2013, she has spent the past three and a half years becoming an integral part of the Bedford House team, enjoying a great deal of success along the way.

“Mr Cumani is a mentor second to none. I’ve learnt an awful lot from him and hopefully I can transfer what I have learnt to my own regime,” she explained.

“Postponed’s King George win really sticks out as a big highlight of my time there. Second Step won a Group 1 in the same couple of months and those would be pretty hard to top. I was very lucky as I rode Postponed in all of his work and to ride a horse of that calibre is pretty phenomenal.”

Murphy moves into Hamilton Stables on September 1 and has assembled her backroom team, including partner and jockey Lemos de Souza.

“He is a great work rider to have in the place and his judgement at home is second to none. Having him in my first season is a real asset.”

Even though most of her experience is on the Flat, Murphy is setting up as dual-purpose handler and has 20 boxes, ten of which are filled. Part of the reason is the inheritance of her father’s National Hunt horses, one of which is Kalane, winner of last year’s Listed EBF & TBA Mares’ Hurdle at Newbury.

Also in her possession is Mariah’s Legend, a half-sister to Pendra who finished a close second on her only start in a bumper for trainer Charlie Longsdon. In the coming weeks Murphy will be looking to the horses-in-training and yearling sales to expand her string even further.

“To get everything off the ground will be fantastic. The fact that I’m in a brand new yard will help. I’m starting [off in] a healthy yard because I think that’s a massive part of it, keeping the horses happy and healthy.

“Hopefully I won’t’ be going too far wrong if I do what I’ve been doing for the last three and a half years. I’ve seen different things in different yards – everybody has their little tricks that work so hopefully I can bring in all of those together to get the edge. Winning is the ultimate goal and it is what you need to keep going.”

Murphy expects her first runner to be unleashed towards the end of September. 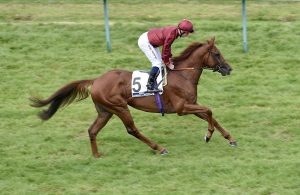 Up Next
Lightning strikes in Celebration Mile