As Haydock took centre stage with Ascot’s Clarence House card falling to frost, the Merseyside crowd were treated to a Nigel Twiston-Davies bonanza, topped off by a fine winning performance by Bristol De Mai in the Peter Marsh Handicap Chase.

A six-year-old son of Saddler Maker, Bristol De Mai was positioned handily by jockey Daryl Jacob from the outset but settled behind the leaders Vintage Cloud and Virak.

He edged to the lead after the eighth assuming a good jumping rhythm. Although headed briefly into the straight for the last time, Bristol De Mai cruised clear after three out.

A fluent leap at the last saw him stride clear in isolation to win by 22 lengths from the Venetia Williams-trained Otago Trail.

“When you can get him into that nice rhythm he really does attack his fences and that’s where he puts other horses in danger,” reflected Jacob. “We haven’t quite seen him so far this year but now he is back to one of his best performances.”

In the familiar colours of Isaac Souede and Simon Munir, Bristol De Mai had only made two appearances prior to this run this season, finishing runner-up on both occasions at Newcastle and Carlisle.

A Grade 1 winning novice hurdler and chaser, this performance now sees him cut for Cheltenham Gold Cup in March, a race which his trainer won in 2010 with Imperial Commander.

Twiston-Davies said: “It was very exciting, you get worried when the last fence looms but he was brilliant over the last as he was over the others.

“The whole thing about this horse in the early days, he was very buzzy if you remember and used to go flat out everywhere. Now he’s settled and he can put him anywhere he wants in a race and it all helps.

“The whole of jump racing is about dreams and we’re dreaming of everything.”

Earlier in the afternoon, one of jump racing’s most popular horses, The New One, notched his third win in the Grade 2 Champion Hurdle Trial Hurdle.

The first part of a fantastic double for the Twiston-Davies yard, the nine-year-old came under pressure early in the straight and flattened three out.

In what turned into a thrilling finish, with three horses within a length after the last, Sam Twiston-Davies managed to drive his charge ahead near the line to win by a length from game runner-up Clyne.

The unbeaten Neon Wolf lived up to the hype in the Grade 2 Sky Bet Supreme Trial Rossington Main Novices’ Hurdle.

Harry Fry’s six-year-old son of Vinnie Roe won his first hurdle start at Exeter on New Years Day. Under Noel Fehily, he kicked on on the turn in and with three fluent jumps ran away with the prize to score by nine lengths. 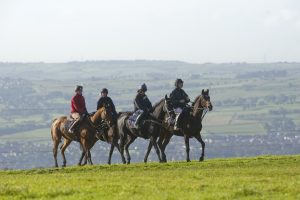