Brisk July Sale trade as Man Of The Night snapped up

Talented four-year-old Man Of The Night topped a brisk second day of trade at the Tattersalls July Sale in Newmarket on Thursday when selling for 175,000gns to Sheikh Abdullah Al-Hamoud Al-Malek Al-Sabah.

As ever with this particular sale, Thursday’s trade reaped the rewards of international interest at every level of the market, on this occasion winding up with an aggregate of 3,445,100gns for 144 horses – 91% of those offered – sold. The average was 23,924gns.

Man Of The Night, a two-time winner for Richard Hannon, is likely to ultimately continue his career in Kuwait but could yet make another appearance in Britain, a spokesman for his new owner said.

“He might go to Kuwait, but we have horses in training in the UK so he may stay here for a time,” he said. “We were looking for a horse who would stay further than a mile.”

Man Of The Night made a bright start to his career when successful on his debut at Newbury in 2019. Highly tried at times since, the son of Night Of Thunder has yet to get his head in front in 13 subsequent starts but was awarded a Doncaster handicap on his penultimate outing on the disqualification of Tawaareq.

Meanwhile, Australia is the destination for Yarmouth winner Restitution, who was knocked down for 150,000gns to Mark Richards, signing as International Thoroughbred Solutions.

Formerly based in Hong Kong, Richards has returned to Britain following his appointment as the UK agent to Goffs.

“It is nice to be back,” he said. “I am acting here for Mark Player’s International Thoroughbred Solutions.

“He is well used to purchasing horses here to go to Australia and the mere fact of me being back here, it is using old contacts and old friends as much as anything else. He likes to have someone on the ground to see the horses, knows the sort of horse I will be looking at and said that, if I found anything that might suit, to get in touch.”

Restitution will continue his career in Australia having been bought for 150,000gns by @paddocktopost on behalf of Mark Player’s International Thoroughbred Solutions at the #TattsJuly Sale. pic.twitter.com/A16cX4NEmE

Restitution, a well-connected gelded son of Frankel, was saddled by John and Thady Gosden to win his second start, a maiden at Yarmouth, in April. He was sold on Thursday by Jamie Railton.

“I thought this is a lovely sort of horse,” he said. “Hopefully he will acclimatise to Australia and he will head straight there now. He had already proven that he can stay a mile and a half, and they seem to get more distance when they get down there anyway. It is advantage to have been able to have performed on a quicker track rather than slower track.”

The Gosden yard was also the source of Albert Camus, a three-time winner who is set to continue his career with Irish trainer John McConnell after selling for 115,000gns to Duleek Street Racing.

“He came highly recommended, the trip looks grand, he has not really encountered soft ground, but I think he will handle it. We have had a bit of luck with Teofilos before to go jumping.

“He seems to have very good attitude as well, he won really well at the line the other day [July 1], he looks as though there is more to come and he could be progressive. Well, he is a progressive Flat horse, and that is what you have to pay for a three-year-old like this.”

The son of Teofilo arrived at the sale in good form as the winner of his most recent start, an extended 1m3f handicap at Haydock. As a result, his rating has risen to 89.

Recent scorer Caio Shark was the most expensive two-year-old to change hands, selling for 110,000gns out of Robson Aguiar’s draft to SPI Racing. The son of Kodi Bear was saddled by Michael Bell to win his most recent start, a 7f maiden at Haydock. 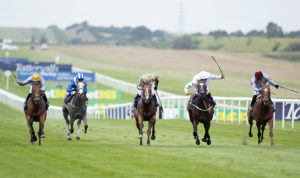 Up Next
Lusail emulates sire Mehmas with July Stakes success