He’d never set foot on a racecourse until July this year but the William Haggas-trained Baaeed confirmed his status as the rising star of the UK racing scene with a thrilling victory over Palace Pier in the Group 1 Queen Elizabeth II Stakes at Ascot on Saturday.

Victory last time out in the Prix du Moulin at Longchamp had confirmed Baaeed’s ability to mix it with the best around, taking his race record to five wins from as many starts, but he faced some awesome rivals on Champions Day, with outstanding miler Palace Pier, French raider and 2020 winner The Revenant and top-class females Lady Bowthorpe and Alcohol Free standing in his way.

Prominent race Benbatl set the early fractions as the field raced on the far side of the course, tracked by The Revenant with Palace Pier and Baaeed settled in midfield. As The Revenant made his bid for glory passing the two-furlong marker, Palace Pier and Frankie Dettori appeared full of running, with Baaeed and Crowley on their outside.

Under Crowley’s drive, Baaeed picked up strongly to gain the advantage and though Palace Pier rallied near the line, it wasn’t enough, Baaeed taking the spoils by a neck, with Emma Banks’ gallant mare Lady Bowthorpe running on bravely in her last race before retirement to claim third spot over The Revenant.

It was an emotional success for those involved with Shadwell’s Baaeed following the death of his late owner Sheikh Hamdan Al Maktoum earlier this year. 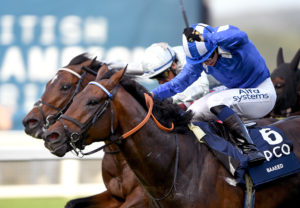 Baaeed and Jim Crowley (nearside) get the better of Palace Pier and Frankie Dettori in the Queen Elizabeth II Stakes | Photo: Bill Selwyn

Winning jockey Jim Crowley said: “I think Baaeed could be a world champion. He’s just a beast, he keeps getting better.

“It was magical. I think people forget he’s come such a long way in a short space of time. It’s a great buzz to ride a horse that good.

“He was a little bit fresh in my hands because I didn’t have any cover, but he was really tough. It was a great race. I thought the first couple of furlongs were sensible enough, then from four down the pace was just relentless, which I thought really suited my lad.

“I’m pretty sure he would stay further if he had to. He’s got a great mind, there doesn’t seem to be any chinks in his armour. He travels so well, the stronger they go in a race the better for him. He’s got a very good turn of foot as well.

“William has done a fantastic job with him. He probably wasn’t 100% going into France and he got the job done, so it was nice to bring him here in tip top condition today.

“The ground was a bit slow for him and on quicker ground I think he would pick up better, but he’s a proper champion.

“I know Sheikh Hamdan will be looking down, smiling, and I owe him everything. He gave me this opportunity, he chose me to be his jockey and although he’s not here to see it, it’s nice to be able to repay him.”

Crowley had earlier partnered Shadwell’s Eshaada, trained by Roger Varian, to a gutsy success over Albaflora in the Group 1 Fillies & Mares Stakes (1m4f) and completed the treble in the famous blue and white silks aboard the Haggas-trained Aldaary in the closing Balmoral Handicap (1m).

French challenger Sealiway, last seen running fifth in the Prix de l’Arc de Triomphe behind shock winner Torquator Tasso, came out on top in a pulsating finish to the richest race on the card, the Group 1 Champion Stakes (1m2f), under Mickael Barzalona. 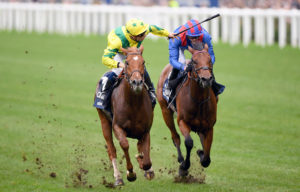 The winner, owned by Le Haras de la Gousserie and trained by Cedric Rossi, had to pull out all the stops as Dubai Honour and James Doyle threw down a strong challenge on his outside, but the son of Galiway found extra in the closing stages to prevail by three-quarters of a length, with the Jim Bolger-trained Mac Swiney a length and a half away in third.

Fancied duo Mishriff and Adayar tired on the good to soft going having looked to hold every chance with two furlongs to run, finishing fourth and fifth respectively.

Barzalona, who won the 2011 Derby on Pour Moi in sensational style while still a teenager, said: “It’s great to be back in the big time and be with this horse since the beginning. He deserved to prove his talent like he did today.

“I didn’t sit on him on Arc day, but the team were very confident. They said he was in good form and that he had improved a lot since the Arc run, so although it was a tough race, they were pretty confident.

“Pour Moi’s Derby is something that will always be in my mind, but I’m very happy for today and hopefully there will be plenty more.”

The Group 1 Sprint Stakes (6f) went the way of Godolphin’s Creative Force under William Buick, the gelded son of Dubawi providing another top-level success for champion trainer-elect Charlie Appleby, while the ultra-tough Trueshan followed up his win in the Group 1 Prix du Cadran by taking the Group 2 Long Distance Cup (2m) for the second year running under Hollie Doyle. 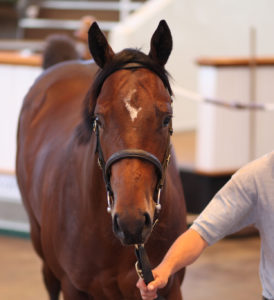 Up Next
Tatts October Book 3 closes with record returns