A Plus Tard looked the class act in the Grade 1 Betfair Chase (3m1f125y) and the Cheveley Park Stud-owned seven-year-old duly sauntered to an easy victory under Rachael Blackmore at Haydock on Saturday.

Last seen finishing runner-up to stable companion Minella Indo in the Cheltenham Gold Cup in March, A Plus Tard jumped beautifully on his seasonal debut and was always travelling well as three-time winner Bristol De Mai and Royale Pagaille cut out the running.

Blackmore had to take a pull as her mount cruised to the front three out and a series of fine leaps took the Kapgarde gelding further clear of his toiling rivals, crossing the line 22 lengths ahead of Royale Pagaille, with the same distance back to Chatham Street Lad in third.

Trainer Henry de Bromhead, who was saddling his first runner over jumps at Haydock, said: “It’s fantastic and both Rachael and A Plus Tard were just brilliant. With his preference for a left-handed track, it just seemed a good race to go for.

“My heart was in my mouth as normal, but they were both brilliant. We’ve always gone back to two miles for his first start in the Fortria but having been beaten for the last two years in that we’ve looked for something else.

“He’s got so much class. He’s won a Grade 1 over two miles and a couple of Grade 1s over three miles and Rachael gets a great tune out of him. He’s still only seven so fingers crossed he’s got a long career ahead of him.

“This was an ideal race for the horse and we had to have a go, after the tenth time I was told no Irish horse had ever won this I was starting to wonder why I bothered!

“He has this preference for left-handed tracks and seems a better horse around them, so the Savills Chase [staged at Leopardstown over Christmas] seems the sensible next option.

“We got him as a four-year-old and Alex Elliott sourced him from France for Cheveley Park and we went chasing with him straight away. He wasn’t a novice over hurdles, so he’s achieved a hell of a lot for a horse so young.”

Also at Haydock, Isabel Williams partnered a big winner for her trainer father Evan aboard Dans Le Vent in the Grade 3 Betfair Exchange Stayers’ Handicap Hurdle (3m½f). The eight-year-old gelding, owned by R J Gambarini Racing, saw off Riggs by a length and a quarter, taking the first prize of £56,950.

Lostintranslation returned to form in the Grade 2 Chanelle Pharma 1965 Chase (2m5f) at Ascot on Saturday for the high-flying team of Colin Tizzard and Brendan Powell.

The nine-year-old, who races for Paul Taylor and Richard O’Dwyer, hadn’t visited the winner’s enclosure since capturing the Grade 1 Betfair Chase at Haydock exactly two years ago. He stayed on strongly to see off Master Tommytucker by four lengths.

Later on the card, the Nicky Henderson-trained Buzz recorded a decisive victory in the Grade 2 Coral Hurdle (2m3½f) under Nico de Boinville, seeing off the brave front-runner Song For Someone, who was giving 6lb to the winner.

The classy Buzz won the Cesarewitch Handicap on the Flat last month and the seven-year-old looks sure to take high rank among this season’s hurdlers for his owners Thurloe for Royal Marsden Cancer Charity. 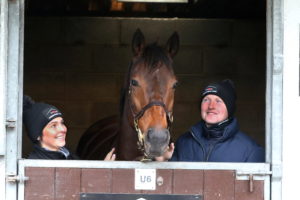 Up Next
Plying heads exceptional day at Goffs