What will Britain’s exit from the European Union mean for the buying and selling of horses? For the major auction houses in Newmarket and Doncaster, it is business as usual – yet fluctuations in the strength of the pound are causing concern as the big yearling sales draw closer.

Tattersalls’ Marketing Manager, Jason Singh, is wary of the long-term implications that Brexit may have in the ring. However he hopes that the recent drop in sterling – to its lowest level since 1985 – could prompt an upsurge in business. Results from the upcoming July Sale (July 6-8), which features horses in training and broodmares, will be revealing.

“In the short-term I think any influence is more currency related,” reflected Singh. “The drop in value of the pound might encourage a few more people to come and buy here and might give us a boost ahead of the July Sale.

“But like a lot of things I don’t think anybody really knows how much impact exiting the single market will have.”

Newsells Park Stud, home to the stallions Equiano, Mount Nelson and Nathaniel, was leading vendor at Tattersalls Book 1 Sale in 2015. The operation has been one of the UK leaders in sending yearlings to the Arqana Sale in Deauville, held in August, and offered 11 high-class youngsters at the French venue last year.

Stud Manager and Director Julian Dollar said: “From our point of view, selling in euros this year would be better but we don’t know what things are going to be like in six or seven weeks’ time.

“A lot of our yearlings that we sell in Deauville still end up going back to Britain having been bought by UK agents, so they might not want to go and buy so much this year because the pound is weak. We might find that while we might be better selling in euros, there might not be so many buyers for our horses.”

The sale and purchase of thoroughbreds goes hand-in-hand with their transportation and movement across the globe. With movement outside of Europe unaffected, the main focus will be on the withdrawal from the single market, which since 1993 has allowed the free movement of goods, people and services – including horses – between member countries without tariffs or restrictions.

Kevin Needham, Director of Newmarket-based BBA Shipping and Transport, says that the movement of racehorses and FEI competition horses between the UK, France and England is covered by the Tripartite Agreement (TPA), which pre-dates Britain’s EU membership and should have negligible impact for horses travelling between these countries.

Needham believes there could be the potential negative impact of VAT being imposed on horses going into Europe. Thoroughbreds would have to taxed and custom-cleared should they want to race in, say, Germany or Italy, that is if Britain adopts a model like Switzerland.

On the plus side, he believes that exit from the single market could offer Britain an opportunity to improve disease control, reducing the risk to thoroughbreds on these shores.

Needham explained: “Before 1993 we imposed a testing regime on incoming animals to protect our own standard.

“Colts coming in had to be EVA negative and everything coming in had to have a Coggins test. Since 1993 we haven’t been able to do that because of the single market, but within the EU there are certain areas where these diseases are endemic. This could be an opportunity to re-introduce a testing regime.” 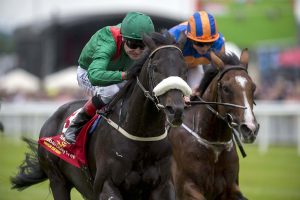 Up Next
Harzand completes Derby double