Breeding on a Budgett

A long held plan that began five years ago with a single mare from Greece will come to fruition at this month’s Goffs UK Premier Sale in Doncaster when Kirtlington Park Stud makes its first foray as consignor into the yearling market.

You could say that Charlie Budgett is bred for the industry. After all, the Budgett name will always be synonymous with Blakeney and Morston, Arthur Budgett’s Derby winners of 1969 and 1973 who were produced out of his wonderful mare Windmill Girl. Both were bred at the Oxfordshire property, then known as Park Farm, while more recently that mantle of raising successful runners has been very ably assumed by Arthur’s youngest son Chris, under whose management the nearby Kirtlington Stud continues to thrive.

Now in the establishment of Kirtlington Park Stud as a boarding operation and consignor, Charlie Budgett is treading that same familiar path as his grandfather and uncle before him.

Kirtlington Park has hosted a polo club since the days of Charlie Budgett’s great- grandfather Hugh Budgett in 1926 and today remains one of the most significant of its kind in Britain with over 150 ponies on its books.

However, it needs only a trip through the 700-acre estate to reveal the sheer scope that the land also continues to possess for the thoroughbred world. For instance, there is the onsite vet clinic headed up by Helen Van Tuyll. And lying just across the road is Kirtlington Stud, whose same variation of limestone brash land served various recent Budgett alumni, such as Harbinger, Aussie Rules and Sir Percy, so well during some of their formative months.

“I was always interested in racing, right from a very young age”

A measured, detailed approach has been adopted in developing the chosen tranche of Kirtlington Park land into a commercial stud. All the while, more and more boarders have been added as well as a stallion in Sea’s Legacy, the Green Desert half-brother to Galileo and Sea The Stars owned by the Alattiyah family who arrived from Qatar earlier this year. And now as the 2019 sales season comes upon us, Kirtlington Park is at the point of preparing to launch its first yearling consignment.

“I was always interested in racing, right from a very young age,” says Charlie Budgett. “My grandfather, Arthur Budgett, was a huge inspiration. He was the whole reason for doing it, everything here is Blakeney and Morston – the whole place revolves around it. So the plan was always to come back here and Christo, my uncle, helped facilitate it.”

Budgett is a familiar face at the sales from his years assisting Johnny McKeever. In between, there were also stints in America, Australia and Argentina.

“I was in property but wanted to go into the bloodstock industry and wasn’t quite sure how,” he says. “Jamie Trotter, a great friend of mine, said he thought I should do some agency work first. Chris agreed but to get there I had to do the stud side first – I had always wanted to come back to that anyway, especially with the stud here.

“So I went to Kentucky to work a breeding season for Shack Parrish at Indian Creek Farm, which I loved. I came back and did a sales season with Johnny and then went to Arrowfield Stud in Australia. I loved every minute of that – they have a huge numbers of yearlings and they’ve very professional and very friendly.

“I also went out to Argentina for six months to work for Antonio Bullrich. They breed a really tough horse out there. It was really interesting to see the different methods and what works – for instance Orpen works very well out there for some reason while other stallions didn’t.

“When I came back, I did another sales season with Johnny. He was fantastic to work for and someone who is very loyal to his owners.”

Budgett returned to Kirtlington Park and embarked on a careful yet ambitious plan of development. One of the first points of attention was a fencing programme, initially funded by a collection of mares sourced from Greece.

“Five years ago we had one mare who had come from Greece,” he says. “She had a Cheveley Park pedigree that had come alive a bit more. So she came over, we got her in foal to Foxwedge and managed to sell her for a bit of profit. That paid for the first fence.

“We later got two more from Greece and that paid for a bit more fencing.

“Then we got a bit of support, mainly from my uncle and Johnny McKeever. And essentially I bit the bullet four years ago and took a loan out from the bank, and that’s when it all got quite serious.”

A series of significant enhancements to the stud followed, notably a new barn and installation of a lunge pit. Plans are also in place for a horsewalker.

Hazel Baker joined earlier this year as stud manager after nearly 15 seasons at Kirtlington Stud and was shortly followed by Maria Roberts. Meanwhile, investment continues to be directed at the fledgling broodmare band.

“Christo said to me, ‘I think you need a good manager’,” Budgett recalls, “and I think Hazel was looking for a new challenge. He told me to speak to her and she moved over this year. She’s fantastic and having her, as well as Maria, allows us to do a bit more.”

He adds: “Every time since we sold something, we’ve reinvested. We’ve been investing in mares when and where we can. And we’ve done more foal shares along the way – that’s helped us gain access to better stallions and David Redvers, Julian Dollar, Ed Harper have all been very helpful in that respect. The plan is very much to continue upgrading the mares and then using the best stallions we can.

“There’s definitely money to be made below the top of the market but if you want the leading owners and agents to take your horse seriously at the sales, you need to be using good stallions. And if you’re limited to 20 mares, then you need a lot of luck on your side – a lot of it in this business comes down to luck.”

Budgett is also quick to credit Sea’s Legacy as a key element in the learning curve. The unraced 14-year-old has small numbers of foals from his stints at stud in France and Qatar but they include Al Hareth, a 19-time winner in Qatar, and Muzhelah, winner of the 2017 Qatar Oaks. He is not the most fertile but did get his single mare in foal this season.

“He’s owned by the Alattiyah family,” says Budgett. “They’re really fun, nice guys – very enthusiastic. And he’s a gentleman of a horse, a pleasure to deal with and he’s basically teaching us about that side of it.”

Kirtlington Park’s debut yearling sales season is set to kick off at the Goffs UK Premier Sale this month when they offer a Starspangledbanner colt on behalf of Deodata Blyth-Currie. One of only 33 registered yearling colts by his sire, he is the first foal of a winning relation to 2,000 Guineas winner Cockney Rebel.

“I’m really excited about him,” says Budgett. “He’s a really nice, straightforward horse who is strong. He’s for a really nice owner too – we’re lucky in that we have good clients.”

From there on, the stud looks set to be well represented at the Tattersalls October Sale, where their draft will include fillies by Charm Spirit and Intello. Meanwhile, a colt from the first crop of Juddmonte’s champion Flintshire, now at stud in Kentucky, is slated for the Tattersalls December Yearling Sale; he is particularly well-connected as a member of the Eljazzi family responsible for Invincible Spirit, Kodiac and James Garfield et al.

“A lot of good horses have come off this area,” says Budgett. “Blakeney and Morston, and then Christo had a Derby winner, Sir Percy, and a world champion, Harbinger. We’ve done all the soil and water samples here as well and it’s great land.

“Christo has been brilliant with helping us, as has Ed Player and Jamie Trotter. Now it’s up to us to get the detail right.” 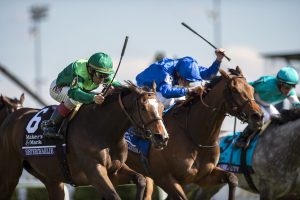 Up Next
Brant bidding for world Group/Grade 1 double