The eldest runners of former champion juvenile Teofilo are only four years old but the Darley stallion doubled his tally of Group 1 winners over the weekend with a brace of top-flight winners in Ireland and France.

It was once again a family affair for the Jim Bolger team as his homebred Trading Leather, racing in the colours of his wife Jackie and ridden by son-in-law Kevin Manning, posted an impressive performance to become his sire’s first Classic winner in the Irish Derby.

A Group 3 winner last year, the colt out of the Sinndar mare Night Visit held off Galileo Rock by a length and three-quarters, with the Derby winner Ruler Of The World finishing only fifth. The runner-up at Epsom, Libertarian, who had subsequently been sold to Godolphin, trailed home a disappointing eighth of nine having looked uncomfortable for much of the race.

Trading Leather became the third Group 1 winner for Teofilo after Parish Hall and Loch Garman – both of whom are also trained, owned and bred by the Bolger family – but less than 24 hours later Havana Gold brought his total to four with a fast-finishing victory in the Prix Jean Prat at Chantilly for Qatar Racing and Richard Hannon.

Out of the Group-winning sprinter Jessica’s Dream, Havana Gold bears an Irish suffix but was bred by former ROA President Sir Eric Parker, the owner of Crimbourne Stud in Sussex. With two winners from her four runners to date, Jessica’s Dream produced a filly by first-season sire Dream Ahead on May 2 and is now back in foal to Teofilo. Her Fastnet Rock yearling filly is catalogued as lot 171 at the forthcoming Arqana August Sale, while her two-year-old filly by Galileo, bought for 400,000gns by Rob Speers for the Araci family at last year’s October Sale at Tattersalls, is in training with Lady Cecil.

Apart from the Group 1 double for Teofilo there was more cause for celebration for the Darley camp with a first Group 1 winner for Authorized courtesy of the impressive all-the-way victory of Ambivalent in the Pretty Polly Stakes at the Curragh. A 24,000gns yearling purchase, the four-year-old filly was also bred by Darley and races in the colours of Ali Saeed. She is out of Darrery, by Darshaan, whose five winning offspring include the Triumph Hurdle winner made in Japan, who, like Ambivalent, is by a Sadler’s Wells line stallion, Barathea. 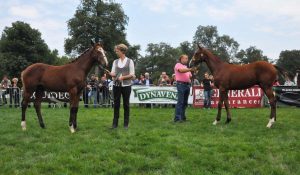 Up Next
Calling all National Hunt breeders