While the race for the apprentice jockeys’ title looks to be going right down to the wire, 19-year-old Georgia Cox has been showing off her own talents in the last couple of months, as two doubles in the space of just over a week would illustrate.

The 5lb claimer attached to the William Haggas yard rode the first of her two doubles at Bath on August 31.

She partnered the stable’s Lapilli to a narrow success in a five-furlong handicap on the card. Only half an hour earlier she got a dream run on the six-year-old grey mare Silverrica over the extended five furlong trip, to land the prize for one of her biggest outside supporters trainer Malcolm Saunders.

The next of her two doubles came only eight days later on the idiosyncrasies of Epsom Downs. The young rider dominated from the front on the Saunders-trained Sarangoo, the duo drawing clear of their rivals inside the final furlong.

Two races later she was aboard Haggas’s Shufoog in the famous blue and white silks of Sheikh Hamdam Al Makthoum. This time riding a patience race from the rear, Cox produced her filly with a strong run in the closing stages to get the better of the Sir Michael Stoute-trained Street Poet by three quarters of a length.

“It’s really nice to have days where everything just goes well you know. I ride quite a lot for Malcolm [Saunders] and he has given me plenty of rides so they were great days,” reflected Cox.

Another of her big outside supporters has been Worcestershire-based Tony Carroll. She has struck up a fine relationship with the yard’s sprinter Pour La Victoire having won two successive races on him back in May.

Winding the clock back, Cox grew up only ten minutes from Newmarket in Burwell and her next door neighbour happened to be the sister of trainer Julia Feilden. During her school holidays and weekends as a youngster, she rode out for the Feilden team and eventually did her work experience there.

Three and half years ago she got a job at Somerville Lodge with Haggas’s Classic-winning team in the heart of Newmarket, and has been there ever since slowly applying and learning her trade in the saddle.

Cox said: “It’s been a massively good experience and there’s a lot of good people there, the boss and Maureen have been fantastic. There are also a lot of ex jockeys there like Michael Tebbutt, Richard and Michael Hills so you get a lot of help.”

The young rider’s first winner came about a year into her new venture in June 2014. She made all the running aboard the ten-year-old gelding Fathom Five for trainer Shaun Harris in the Middleham Racing Breaks Apprentice Handicap, a truly special moment for the jockey.

“He was a bit of a wise old hand, he’d run many times and knew what to do more than me so I just let him get on with it,” said Cox.

Now on 20 winners for the year, Cox’s purple patch in the latter half of this season looks to be continuing right to the end. She is operating at a healthy 21 per cent strike, only equalled by Ryan Moore and Frankie Dettori.

Since her two doubles she has partnered another handful of winners for her boss including aboard Symposium, who she won with twice in a row.

Once the turf season ends, Cox plans to stay at home over the winter picking up rides of Haggas who is likely to have a few late two-year-olds to unleash on the all-weather.

Not only this, she is confident that the apprentice title next season could be something worth fighting for.

She said: “It would be nice to go for. My agent Tony Hind obviously has a good record of getting people to be champion jockey so hopefully I’ll have a good chance at it.” 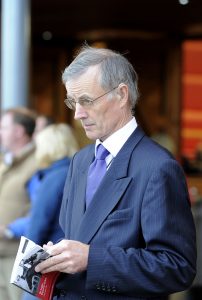 Up Next
Veteran trainer signs off