As TBA focuses on encouraging small breeders, we’d love feedback from you

December saw a phenomenal end to the domestic bloodstock trade with records at Tattersalls for foals and breeding stock. I doubt anyone expected trade to be so strong and without exception all the commentators agreed that we had witnessed a boom at the top of the market, fuelled by a combination of global investors and unexpected returns from a strong yearling trade which enabled pinhookers to reinvest.

We can take heart that at the top end the industry is robust and the trickle-down effect has also lifted the middle market, which we hope is sufficient to provide encouragement to smaller breeders. We are increasingly aware that the industry has heavy reliance on smaller breeders, with 34% of foal production centred on this fragile demographic. This has always been the case, but with the split appearing to be more noticeable in recent years the TBA will focus on providing support and expertise to small breeders in 2014. If on reading this you recognise yourself as a member of this group, please do drop me a line with your thoughts on priorities for the TBA; your active involvement will be important in helping to recognise where we can make a difference for members.

I cannot do more than to keep reminding members of the extent and range of our work on behalf of the industry. Political lobbying is becoming increasingly important to protect breeders’ interests and this year the TBA retained the Tripartite Agreement for the free movement of thoroughbreds between Britain, Ireland and France.

Closer to home the TBA increased its funding for Flat and National Hunt race sponsorship, with the latter securing additional black-type opportunities for mares, as well as adopting the French National Hunt foal show idea with a successful day at Bangor-on-Dee racecourse in July.

The TBA extended its commitment to veterinary research, adding a further one-year research project, promising practical benefits to members in its programme. In the field of education and employment, the TBA presented to over 600 students in equine colleges, held a hugely successful free-to-attend members’ seminar, and secured an increase in industry funding for stud staff training. The Next Generation Committee organised eight exclusive members’ events, doubled the number of 18-35 members, and secured a BHA grant to raise career opportunities in the industry in 2014.

BOBIS has enjoyed a very successful first year, with 178 winners to the end of November and over £1 million paid out to breeders and owners in Britain. The scheme also recently announced that all Class 2 to 4 fillies-only races for two- and three-year-olds will offer £10,000 BOBIS prizes to the qualified winner – a great boost for breeders and owners in what can be a very tough market for fillies. A reminder too that the deadline is fast approaching for registering yearlings for next year’s scheme; breeders have until December 31 to register their yearlings for £250 in order not to miss out on the opportunity to win BOBIS prize-money.

Another deadline for members is the nomination stage for the Godolphin Stud and Stable Staff Awards, sponsored by Godolphin and organised by the BHA in association with the Racing Post.

Offering £120,000 in prize-money, the awards are now in their 10th year and provide an excellent opportunity for stud owners to recognise and reward the hard work and dedication of their staff, both in the yard and in the office. Although many prefer not to single out just one employee, it must be recognised that a winning nomination is a success for the whole yard or stud, with equal prize-money awarded to the yard as well as to the winning staff member. Two runners-up and their yard in each category are also rewarded.

With six categories covering such areas as Dedication to Racing, Leadership, Newcomer, Administration Staff, as well as Stud Staff, there is plenty of opportunity to nominate your hard-working and dedicated stud staff. I urge all employers to do so. 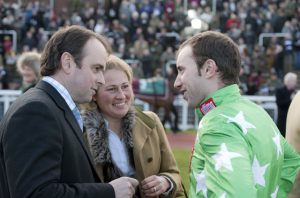 Up Next
Wayne’s wonderful world