A record average of just over 65,000 gns was achieved

This was helped by the fact that there was a record number of seven figure yearlings. These included a 2.6 million gns yearling by Dubawi out of Meon Valley Stud’s Group 1-winning mare, Zee Zee Top.

At the end of the three days, an eye-watering total of 88,038,000 gns had been spent on the thoroughbred talent on show.

The pattern was to continue into Book 2 as a new record averaging price of 65,545 gns was set by the close of play on Wednesday evening.

The highest priced lot on the first day saw a protracted battle in the ring between Shadwell’s Angus Gold and Bloodstock Agent Patrick Cooper.

Gold – who picked up 16 yearlings for nearly 9 million gns last week – came out on top to secure the Shamardal colt for 250,000 gns from consignors Mountain View Stud.

The sale-topper of Book 2 came on the second of the three days at a price of 380,000 gns. The Kodiac colt out of an unraced Shadwell mare, was the subject of another bidding duel but saw John Ferguson get the better of Roger Varian and Joe Murphy, giving consignors Bellewstown Farm Stud plenty of satisfaction.

Unsurprisingly, the sole entrant in the catalogue by Dubawi attracted a great deal of attention and became the second most expensive yearling after being consigned on the final day.

The colt out of Brazilian Samba is from the family of Henrythenavigator, Listen and Saffron Walden and was secured by Ferguson at a price of 300,000 gns.

Sneaking into the top ten lots of the week was an Iffraaj bay colt out of the French-bred Acclamation mare Touquette, consigned by Corduff Stud in County Kildare.

Closely related to Group 1 Prix Morny winner Arcano, he was picked up at a fee of 240,000 gns by Mark Richards of the Hong Kong Jockey Club.

Similar to last week, the feature of the sale has been the strong demand at the top of the market

“At the end of Book 1 of the October Yearling Sale last week we reflected on the extraordinary progress the sale had made since 2010 and the same applies to Book 2,” reflected Edmond Mahoney, Chairman of Tattersalls.

He continued: “Similar to last week, the feature of the sale has been the strong demand at the top of the market.

“We made a determined effort to control the numbers in Book 2 this year and cataloguing 140 fewer yearlings than in 2015 has made the sale significantly more manageable for both vendors and buyers alike and without doubt assisted the sale.” 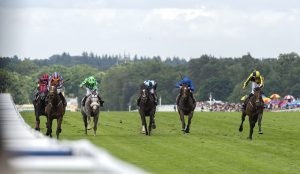 Up Next
Cox star ready to shine again