Bolger team in rude health at the Curragh

With every new Flat season comes debate as to whether the first Classics come too early but the man whose stable houses 2,000 Guineas favourite Dawn Approach proved that he has his string in tiptop order with a four-timer on the opening day of Ireland’s Flat turf season.

Jim Bolger, who had won his country’s first juvenile race of the year for the past two seasons, hit the jackpot once again when Saburo got the turf season underway with a two-and-a-quarter length win in the Tally-Ho Stud EBF Maiden at the Curragh.

The young son of Cape Cross races in the colours of Sheikh Mohammed and was bred by his Darley operation, which stands the former Bolger trainee and Derby winner New Approach, whose son Dawn Approach took the same race last year en route to becoming champion juvenile.

Bred by Bolger, Dawn Approach was purchased by Sheikh Mohammed mid-way through last season and his unbeaten progression through the season, which included three Group-race victories, helped to promote his father to the title of champion first-season sire.

No sooner had Saburo’s heart rate returned to normal than his stablemate Caesaria won the next race on the card, the Bog Bad Bob Maiden for three-year-olds. The Bolger team was far from finished, however. The day’s feature race, the Group 3 Lodge Park Stud EBF Park Express Stakes fell to the progressive daughter Rehn’s Nest, who saw off the odds-on favourite Yellow Rosebud. Rehn’s Nest holds an entry for the Oaks and on paper the portents are positive for Epsom as she is by the 2007 Derby winner Authorized out of a mare by the 2001 winner Galileo.

Rounding off the day in style was the regally-bred Alpinist, who appeared to make light work of the heavy ground when making all to win the Irish Stallion Farms EBF maiden over a mile. The three-year-old colt is a New Approach half-brother to the dual Champion Stakes winner Alborada from Kirsten Rausing’s prolific family of Alruccaba. He is owned in partnership by Rausing and the trainer’s wife, Jackie.

Ireland’s champion trainer Aidan O’Brien managed to take home one prize from the Curragh – the Gabriel Curran Memorial Madrid Handicap won by Francis Of Assisi – and lest anyone was in any doubt of the dominance of Ballydoyle, a team of around 60 of that stable’s residents took part in four racecourse gallops at the end of the day’s action. The team included the dual Derby and 2,000 Guineas winner Camelot and this season’s Guineas/Derby entrant Mars.

Not present, however, was the Racing Post Trophy winner Kingsbarns, whom the trainer revealed had suffered a setback which may rule him out of the 2,000 Guineas at Newmarket. The unbeaten Galileo colt picked up a foot infection after losing a shoe during a routine canter and was forced to miss ten days of training. 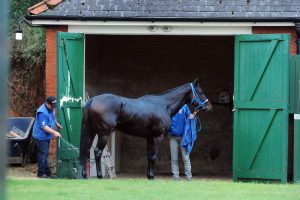 Up Next
Black Caviar return likely