BOBIS gets backing from the Levy Board

I am delighted to report positive news on the progress of the British Owners and Breeders Incentive Scheme (BOBIS). Any ambitious scheme which relied on a significant boost of capital was always going to take some time to devise and trial successfully, and whilst it is our intention that BOBIS will continue to evolve in the early years in response to feedback from our members and the wider industry, we believe that together with the BHA we have responded to the industry’s calls to create what could in due course amount to a single incentive scheme to reward British breeders and owners.

Our primary responsibility is to look after our members’ interests and the aim of BOBIS is to change behaviour through encouraging more mares to be domiciled in Great Britain and to encourage racehorse ownership, particularly with incentives to race and keep mares here.

Following the recent announcement that the number of British-based mares covered fell again this year, with prospects of a further decline in the foal crop of 2013, it is vital that the TBA instigates a mechanism to stimulate our industry and support our breeders. We have listened to earlier concerns regarding the Breeders’ Prizes Scheme, and BOBIS eligibility will not be limited to the offspring of British-based stallions, allowing breeders to send their mares to the most suitable stallion, on the basis that they are returning to their British stud farms.

Levy Board funding has been earmarked, allowing BOBIS to be launched in 2013. This will provide a significant uplift in prize-money for winning two-year-olds who are the progeny of British-domiciled mares or British-based stallions. The BOBIS prize will be shared 30% to the breeder and 70% to the owner, with deductions for trainer, jockey and stable staff.

BOBIS prizes will be valued at a base level of £6,000, initially for two-year-olds in 2013, and increasing to two- and three-year-olds in subsequent years in class 2 to 4 maiden races, novice races, class 2 to 4 nurseries, and conditions races. This is a significant increase on the advertised prize-money and, with a relatively small budget, will certainly influence behaviour among breeders and owners. I am pleased that the BHA has recognised that breeders need particular support for fillies and have extended BOBIS prizes to fillies-only class 5 maidens.

This return is undoubtedly significant and will stimulate the appetite for basing broodmares in Britain in the longer term. The alternative of using this money as prize-money would have little or no effect, as it would merely dissipate into the general prize-money fund, equating to a contribution of approximately £100 per race. With BOBIS, I hope I have showed what we can achieve instead.

Breeders will be required to register their eligible stock as a foal, yearling or two-year-old, with a further nomination fee payable by the owner or owner/breeder if the horse is to be retained.

There are some transitional arrangements in the early years, with further evaluation at the end of year one, and we will guide breeders through these, supported by Weatherbys, who will administer the scheme. Full details on BOBIS will be available on the TBA and BHA websites in due course.

I must congratulate Paul Bittar and Julian Richmond-Watson, supported by our sub-committee and BHA administrators. They have consulted a wide range of industry representatives throughout this process, offering a great example of how British racing can work together.

We have the luxury of time to undertake yet more consultation before the National Hunt BOBIS is launched. 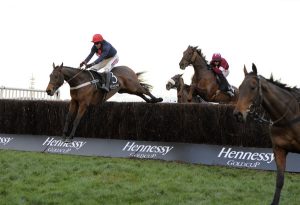 Up Next
Festival winners battle home for Hennessy