Bob Olinger followed up his maiden hurdle victory at Navan last month with a decisive victory in the rescheduled Grade 1 Lawlor’s Of Naas Novice Hurdle on Wednesday.

But the manner in which Bob Olinger cleared the final two flights under jockey Rachael Blackmore meant that Blue Lord was left behind as the youngster scooted clear to win by an impressive six and a half lengths.

Blackmore was impressed with the gelding’s performance and said: “I was just trying to ride a straightforward race on him, he’s a simple horse to ride in that manner and I was happy the whole way. My horse was nice and relaxed.

“He jumped better today in the second half of the race and the jump is there if you ask him. Everyone has always thought a lot of this horse from day one. He’s been very consistent and anyone that’s been involved with him has always liked him.

“This was the big test. He was more professional than he ever was and it’s great to be involved with him. This trip looks ideal for him for now and he looks like he might get further in time.” 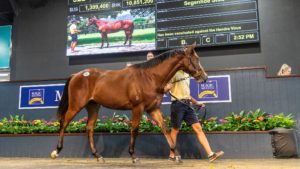 Up Next
A$1.8 million Kingman colt steals the show at Magic Millions