Following on from an emotional first day, Adam Kirby wins his second Group 1 of the week on My Dream Boat

All eyes were on the highest-rated racehorse in the world, A Shin Hikari, who caught Europe’s imagination when romping to a ten-length success in the Group 1 Prix d’Ispahan at Chantilly last month. My Dream Boat was 14 lengths behind that day, but the tables were turned spectacularly in the Prince of Wales’s Stakes on the second day of Royal Ascot.

The Japanese challenger, ridden by 47-year-old Yutaka Take, took the field along as expected but raced keenly in front. Turning into the straight the field fanned out however when asked, A Shin Hikari could offer no more and was quickly swamped. The Aidan O’Brien-trained Found went for home and looked to get first run but My Dream Boat, held up in the last pair by Adam Kirby, came with a sustained challenge, and despite drifting out into the middle of the course, got up to score by a neck.

For Kirby, his fourth Group 1 win comes on the back of a remarkable first day, which included a win on Profitable in the King’s Stand Stakes and the birth of his son. The jockey’s first Group 1 came aboard another Clive Cox-trained star, Lethal Force, in the Diamond Jubilee Stakes at the 2013 Royal meeting.

“He gave me a real good feel when he won two starts ago at Sandown, he picked up real good,” reflected Kirby. “Last time he was a bit free, and didn’t finish his race – things just didn’t go right.

“Full credit to the horse, he stayed at it and it was a very gutsy performance.”

Full credit to the horse, he stayed at it and it was a very gutsy performance

For owners Paul and Clare Rooney, better known for their jumping exploits, My Dream Boat’s narrow margin win gives them their first success at the highest level on the Flat. Just two months ago, the pair went close to winning the Grand National with runner-up The Last Samuri.

Clare Rooney said: “It’s just unbelievable, I’m still shaking and I can’t get my breath back. I’m still in shock. I’m in tears and full of emotion.”

In the Jersey Stakes, 2,000 Guineas third Ribchester ran out a comfortable winner for trainer Richard Fahey. William Buick took a lead from Gifted Master and the three-year-old travelled well in the leader’s slipstream before switching out. When asked he duly picked up in good style, putting Godolphin on the score-sheet after they fielded 14 runners on the opening day without success.

The two-year-old American filly, Lady Aurelia, spreadeagled the Group 2 Queen Mary Stakes field in what was one of the most impressive Royal Ascot victories in modern memory. In what was to be US trainer Wesley Ward’s third win in the race, the filly showed blistering early pace to lead the field. Frankie Dettori pressed the button with a furlong and a half to go and she ran right away to score by seven lengths.

“It was breathtaking from the top,” said Dettori. “I was going some very good splits and when I got to the furlong and a half I asked her to go and she found another gear. I was completely shocked.”

The Andre Fabre-trained four-year-old filly, Usherette, took the honours in the Group 2 Duke of Cambridge Stakes for Godolphin. Mickael Barzalona bounced out smartly but took the daughter of Shamardal back in the field to find cover. When brought through in the closing stages, she quickly established a winning margin.

A field of 28 made up the Royal Hunt Cup, which produced a bunched finish and saw Portage leading home the field on the far side under James Doyle for Irish trainer, Michael Halford, securing a third strike on the day for Godolphin. It was the first Irish success in the race for 50 years and brought their tally for the week up to three.

In the closing Sandringham Handicap, John Gosden, who book-ended the opening day in the Windsor Castle Stakes, was to copy the feat. His grey filly, Persuasive, owned by Cheveley Park, backed up market support under jockey of the moment Dettori to score by a length and a quarter. 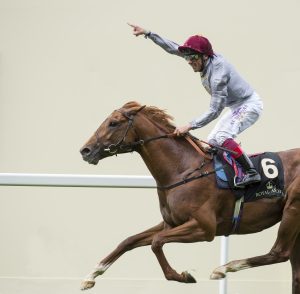 Up Next
Gene test pays off as Dettori strikes gold