In what turned out to be an incident-packed renewal of the Prix Maurice de Gheest – which included three runners bursting out of the stalls prior to the six and a half furlong contest – the Francois Rohaut-trained Signs of Blessing, did it the hard way to claim a first win at the highest level.

In front of the packed Deauville stands, the five-year-old son of Invincible Spirit wasted little time from the gates as expected and took along the 15-runner field down the centre of the track under Stephane Pasquier.

The duo, tracked by Gordon Lord Byron and Suedois throughout most of the race, upped the ante with two furlongs to go and gained about a two length advantage over his field. The gelding kept on strongly in the final furlong and wasn’t to see another rival, crossing the winning post a length and quarter in front of runner-up, Donjuan Triumphant.

Signs of Blessing was last seen in action in the Diamond Jubilee Stakes at Royal Ascot, where he was only narrowly denied by the Henry Candy-trained Twilight Son and Gold Fun, having cut out most of the running.

No doubt an improved sprinter this season, this victory is by some margin a standout on his CV to date, and adds to a Group 3 success at Baden-Baden two years ago and three Listed races.

After tasting disappointment aboard the Francis-Henri Graffard-trained Erupt in the King George VI and Queen Elizabeth Stakes two weeks ago, Pasquier claims victory at the highest level for the first time this campaign. The 38-year-old’s last Group 1 win came aboard the Niarchos-owned Erupt, just over a year ago in the Grand Prix de Paris at Saint-Cloud.

For Sauvagnon-based Rohaut, it had been a four year wait between Group 1 drinks. Pasquier was also in the plate aboard his last one, Lucayan, who caused an upset when leading in the shadows of the post in the 2012 French 2,000 Guineas.

Rohaut hit the board at Group 3 level at last year’s Glorious Goodwood meeting, when his Al Shaqab-owned filly Amy Eria, galloped to success in the seven furlong Oak Tree Stakes.

The British and Irish launched a five-pronged assault this year, with trainer Charlie Hills bidding for back-to-back victories with Dutch Connection after his superstar sprinter Muhaarar, bagged this prize 12 months ago.

The Godolphin colt raced towards the stand side but could never quite get to the leaders, while the Middleham Park-owned Donjuan Triumphant, fared best of the overseas raiders finishing well from the back of the field under Alexis Badel for trainer Richard Fahey.

Keeneland Phoenix Stakes
Over at Irish Flat racing headquarters, leading juvenile Caravaggio made light work of his task in the Group 1 Phoenix Stakes to notch a fourth straight win.

The unbeaten son of Scat Daddy, was held up in the early stages under Seamie Heffernan but gradually made progress towards the far side travelling kindly for his rider. He was sent for home a furlong and a half out and readily drew clear of his four rivals to secure a four length success.

Aidan O’Brien’s colt had impressed last time out in the Group 2 Coventry Stakes at Royal Ascot, despite finding himself on what appeared to be the disadvantaged side of the track.

He further strengthens his credentials as ante post favourite for next year’s 2,000 Guineas and in the process gave the Ballydoyle maestro a 15th triumph in the two-year-old contest. 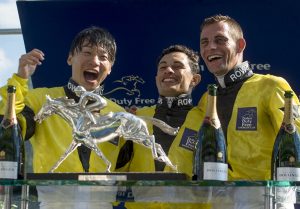 Up Next
Rest of the World take fifth Shergar Cup