Jockey Rachael Blackmore enjoyed the biggest win of her career to date after steering home Abolitionist to victory in the Leinster National at Naas.

The son of Flemensfirth, who was coming off the back of four consecutive seconds, was held up in mid-division under Blackmore as Futuramic and Kilford took the 18-strong field along.

Having made good progress, Abolitionist joined the leaders on the turn for home and went on by a few lengths after the second last towards the stands side.

Although hotly pursued by Gigginstown’s Folsom Blue after the last, the gelding kept finding to take the €59,000 prize by just under two lengths.

“It was great to do it. I was happy with him throughout, he brought me to the front a bit sooner than I planned but I just didn’t want to take him back on that ground,” reflected Blackmore.

“He’s had a lot less racing than some of these other horses and fresher legs.”

The young rider has had a breakthrough season supported by the likes of John Joseph Hanlon.

Ahead in the conditionals’ race with 28 wins on the board, she now looks forward to some chances at the Cheltenham Festival next week.

For trainer Ellmarie Holden, who only inherited the nine-year-old last October, this success also comes as her most important to date in a short career so far.

Assistant trainer, Ray Cody, said: “Rachael said he didn’t like the ground but he’s a fresh horse and he just went through it.

“The plan all along was the Irish Grand National and we needed to win today to have a chance of getting in that so maybe he might get into it now. Better the ground the better he will be.”

Earlier in the afternoon, the Gordon Elliott-trained Ball D’Arc got the better of his three rivals in the Grade 3 Naas Directors Plate Novice Chase.

In a purely Gigginstown affair, the son of Network led after the last in the hands of Bryan Cooper and extended his advantage over Gangster, who made a shuddering error at the last, to win by 15 lengths. 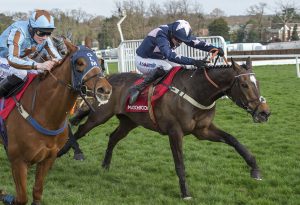 Up Next
Imperial glory for progressive Prize