Luke Nolen’s infamous “oops, have we held on?” win on Black Caviar over Moonlight Cloud in the Group 1 Golden Jubilee Stakes at Ascot this year will be the lasting memory held by English racegoers of Victoria’s champion jockey.

‘Down Under’, however, there was no dropping of hands as the rider kept at it right to the line at the final meeting in July to win the 2011-12 Victorian metropolitan jockeys’ premiership from main rival Craig Newitt, 74-69.

And it was Nolen’s Black Caviar partner, trainer Peter Moody, who kept the winners coming to get the jockey over the line after Newitt took a narrow lead when Nolen missed meetings while at Ascot.

Newitt, who had far more city rides (554 to 447), had some premiership satisfaction, winning the state title (combined city and country) with 169 wins, 25 clear of Brad Rawiller. But in the bigger races, Moody had more ammunition than the neighbouring Caulfield stable of Mick Price, Newitt’s major supporter.

Like Nolen, Moody earned his third straight metro premiership with 91 wins, lengths ahead of the pack headed by Price (51). Moody won the state title, too, with 189 wins, 24 ahead of Darren Weir on 165 — 140 of Ballarat-based Weir’s wins were on country tracks.

The partnership success of Moody and Nolen has been remarkable, considering it began when the trainer engaged Nolen for two rides on a country track in 2003 believing he was getting Shaun Nolen, Luke’s brother.

In 2011-12, the pair had nine Group 1 wins in Australia — five with Black Caviar, who topped the Group 1 list from star three-year-old filly Mosheen (four), three with Manighar, formerly trained by Luca Cumani at Newmarket, and one with Mid Summer Music. 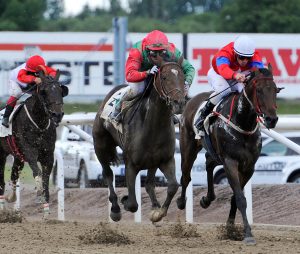 Up Next
Swedish Derby winner for Sir Percy