Sporting icons in Australia don’t come any more revered than Sir Donald Bradman and Phar Lap. Each set numerous records during outstandingly dominant sporting careers, and each remains the standard by which subsequent stars are measured.

One of the Don’s most sacred milestones was the score of 334 which he hit against England at Leeds in 1930, a record for an Australian batsman in a Test and one which many assumed would remain unthreatened forever.

However, come 1998 in Peshawar, Australia’s captain Mark Taylor appeared on the brink of the impossible. In the last over of the second day on which Taylor had been at the crease, Taylor was on 333. Ijaz Ahmed got a hand to the ball on Taylor’s final big hit of the day, reducing what had seemed a certain and record-breaking four to a single.

Taylor thus ended the day on 334, tied with Bradman’s landmark. The following morning, with history seemingly in his grasp, Taylor walked out from the pavilion and told the umpires that he was declaring. Some records are seemingly too sacrosanct to be broken.

However, on Saturday week, one of Phar Lap’s most famed achievements looks almost certain to be surpassed. Phar Lap certainly didn’t win all of his 51 races (he was beaten 14 times, including finishing last in his first race and then unplaced in his next two) but as he matured he became almost invincible. He won 32 of his final 35 starts, heavy weights (such as the 10 stone 10lb which he shouldered in the 1931 Melbourne Cup) and bad luck bringing about the inevitable occasional defeat. During this period, his longest unbeaten run saw him record 14 consecutive victories.

Phar Lap’s run of success has now been equaled by Australia’s reigning Horse of the Year: the world champion sprinter Black Caviar landed her 14th consecutive victory on Saturday when sauntering home from last season’s Magic Millions winner Karuta Queen in the Group 2 Schillaci Stakes (named after the Lee Freedman-trained champion sprinter of the early ‘90s) at Caulfield on her seasonal reappearance.

Now aged five, the daughter of Bel Esprit is unbeaten, these 14 victories having come in the only 14 races which she has contested. With the option of a declaration not really applying to a sound racehorse, Black Caviar now looks almost certain to surpass Phar Lap’s milestone by taking her unbeaten run to 15 when her trainer Peter Moody sends her out for her next race, which is likely to be the Group 2 Moir Stakes on Moonee Valley’s Cox Plate card on Saturday week.

After that race, Black Caviar is likely to face a worthy rival when she is taken on by the star three-year-old Sepoy at weight-for-age on the final day of the Flemington Spring Carnival. That really will be a clash to savour. 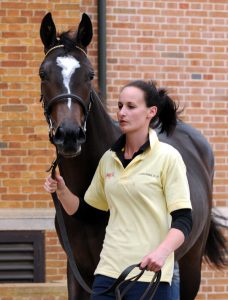 Up Next
Seeing stars