The peerless Australian sprinter Black Caviar, who thrilled a European audience at Royal Ascot last summer, continues along her merry, unbeaten way. Her victory on Australian Derby Day at Randwick in the TJ Smith Stakes at Randwick, named after the most successful trainer in Australian racing history, has taken her unbeaten run to 25, giving her a new landmark in the process.

Black Caviar shares her berth in the pantheon of the Australian turf with a select band of champions. Phar Lap is in there, obviously, while a more recent hero was Kingston Town, who was trained by Tommy Smith to win 30 of his 41 races between his debut in March 1979 (when he finished last!) and his final curtain call in Perth in the Western Mail Classic in November 1982.

Of Kingston Town’s 30 victories, 14 came in Group 1 races – and, by winning the Group 1 TJ Smith Stakes, Black Caviar has replaced him as the country’s most prolific Group 1 winner, that victory being her 15th top-level triumph (of which 14 have come in Australia and one in England).

Black Caviar has nothing left to prove, her career being a shining jewel which reflects maximum credit on her, as well as on her trainer Peter Moody, who has handled her with consummate skill. However, if we are to compare her with champions of the past, it is worth noting that such comparisons arguably flatter her – or, to put it another way, glory is arguably more easily earned nowadays than it was in the past.

Australia signed up to the Pattern system in 1980, meaning that Kingston Town was one of the first champions whose achievements could be measured by Group race victories.

However, the process which has seen an ongoing expansion of the black-type programme in Europe has been mirrored in Australia. Kingston Town’s victory in the Group 2 Peter Pan Stakes would now be called a Group 1 win (in the Golden Rose) – while several of Black Caviar’s Group 1 victories have come in races which either were categorised less highly in those days, or did not even exist.

Furthermore, the fact that she has no defeats to her name, while Kingston Town had his colours lowered 11 times, is more the result of differing approaches to race-selection: Black Caviar has generally only contested races whose conditions are ideal for her and over a distance range of only 400m, while Tommy Smith ran Kingston Town in a startlingly wide variety of races.

Kingston Town won Group races from the 1200m of the Group 2 Expressway Stakes to the 3200m of the Group 1 Sydney Cup (as a three-year-old). Furthermore, Kingston Town’s wins-to-runs ratio suffered from the fact that Smith kept running him in Melbourne: notwithstanding the fact that the black gelding won an unparalleled three consecutive Cox Plates around Moonee Valley, Kingston Town was not nearly as good going left-handed as he was on Sydney’s right-handed tracks: between June 1979 and August 1982, Kingston Town contested 21 races in Sydney (between 1200m and 3200m) and won them all.

Of the great sprinters of Australian turf history, Black Caviar can arguably be regarded as supreme. She has not been as prolific a winning machine as the super-tough gelding Manikato, whose 29 victories included 20 in races which now carry Group 1 status and whose record in winning a weight-for-age race (the William Reid Stakes at Moonee Valley, which is now a Group 1 race and which Black Caviar won in 2011) five years running (1979 to ’83 inclusive) is unlikely ever to be surpassed.

However, Manikato was beaten 18 times in his 47-race career. Furthermore, Black Caviar’s brilliance is arguably no greater than that displayed by the 1968 Golden Slipper winner Vain, notwithstanding that Vain was beaten twice. However, Vain’s 14-race career was as short as it was brilliant, as he only raced as a two-year-old and a spring three-year-old.

As discussions over the career of Frankel have proved, comparisons with the stars of yesteryear are odious. However, whichever way one assesses Black Caviar’s career, it is impossible to conclude anything other than that she is a truly outstanding racehorse – and one who has been blessed to find herself in the stable of a truly outstanding trainer.

It is possible that we shall never again see a racehorse put together as splendid a career as the one which she is currently enjoying, so we should enjoy her as fully as we can. We were blessed to see her in England at Royal Ascot last year – and if she makes a return visit, either this year or next, that would be a further blessing.

On the subject of Royal Ascot, it should not be forgotten that, whether or not she comes this year, her Group 1-winning younger half-brother All Too Hard is pencilled in for a clash with Animal Kingdom in this year’s Queen Anne Stakes. And perhaps her Redoute’s Choice yearling half-brother, who fetched a record-breaking $5,000,000 at the Inglis yearling sales in Sydney last week, might run there some day too! 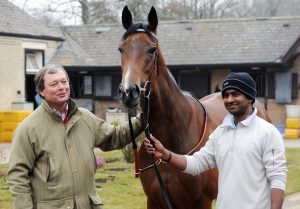 Up Next
Prize-money boost for 2013 season