At the end of July, Exceed And Excel will be crowned champion sire in Australia for the first time and he has been paid the ultimate compliment by being selected as the first mate for superstar mare Black Caviar.

Exceed And Excel has recently left Dalham Hall Stud in Newmarket to return to his home country for the southern hemisphere covering season, which he spends at Darley’s base in the Hunter Valley, New South Wales.

A press release issued by Sheikh Mohammed’s stud this week said that Darley was honoured that the son of Danehill had been chosen by Black Caviar’s owners during her first season at stud.

“It is an absolute privilege for Darley to be sent a racemare of her calibre, arguably the best that we have seen in the past fifty years,” said Darley’s managing director Henry Plumptre.

“For us at Darley, it represents a pinnacle for a breeding operation that was begun by His Highness Sheikh Mohammed in Australia in 2001. The purchase of Exceed And Excel in 2004 was a defining moment for our stallion roster at the time and he has proven himself an elite stallion in two hemispheres, as did his father Danehill.”

At the recent TBA Awards in Newmarket, Exceed And Excel was honoured as Britain’s leading sire for 2012, a year in which his flagbearers included Excelebration, Fulbright and Bungle Inthejungle.

Though no sprinter of the modern era can match the unbeaten record of Black Caviar, who retired in April with 25 straight wins to her name, Exceed And Excel was no slouch himself in his days on the track. Of his seven victories, six were set in Group company, with his two Group 1 wins including the 2004 Newmarket Handicap at Flemington, a race won seven years later by Black Caviar. 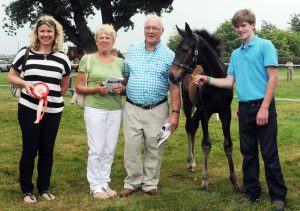