The greatest show in town
Stories

Peter Moody, the trainer bringing the unbeaten Black Caviar to Royal Ascot for the Diamond Jubilee Stakes, describes himself as the quintessential Australian.

He is. But if a word were to be put between quintessential and Australian, it would be ‘country’. Aussies say that ‘You can take the boy out of the country town, but you can’t take the country town out of the boy’. In Moody’s case, that country town is Charleville, some 500 miles west of the Queensland capital, Brisbane.

There, a gum tree’s a gum tree; probably a bloody gum tree, but certainly never a eucalyptus.

So that’s Moody. A 42-year-old country boy who has made it to the top of the tree in the city – he has been champion trainer in Melbourne, the pinnacle of Australian racing, for the past two seasons and will be again when the current season finishes on July 31.

It’s no wonder that when asked how he feels about Royal Ascot, he says: “I’ve got little interest in it, to be honest”. That’s not being disrespectful, because the comment is quickly qualified by Moody, referring to the success at the royal fixture enjoyed by compatriots Lee Freedman and Joe Janiak.

“To see how those sort of blokes were moved by it was quite remarkable,” Moody says. “You see ‘Freedy’ win Melbourne Cups and Golden Slippers and not be moved, and he won, at the time, a Group 2 at Royal Ascot! He was very moved by it, so clearly it means something.

“Really, I’m the quintessential Aussie who thinks we’ve got the best racing in the world, and asks, ‘Why do we need to go over there to show our wares?’ But, obviously, it does mean something.”

For Moody and the Black Caviar team, it means underlining what is obvious: that Black Caviar, with 21 wins from 21 starts (from five to seven furlongs, including 11 Group 1s and seven Group 2s) is the best sprinter in the world, and in 2011 the second best racehorse behind the unbeaten Frankel.

Obviously, too, it is the owners who have driven the expedition as they have the ride of their life with a six-year old mare that Moody bought for them with a bid of $210,000 at the Inglis Premier Yearling Sale in Melbourne early in 2008. Then she was simply a black filly by former top sprinter Bel Esprit from the Desert Sun mare Helsinge, foaled on August 18, 2006. 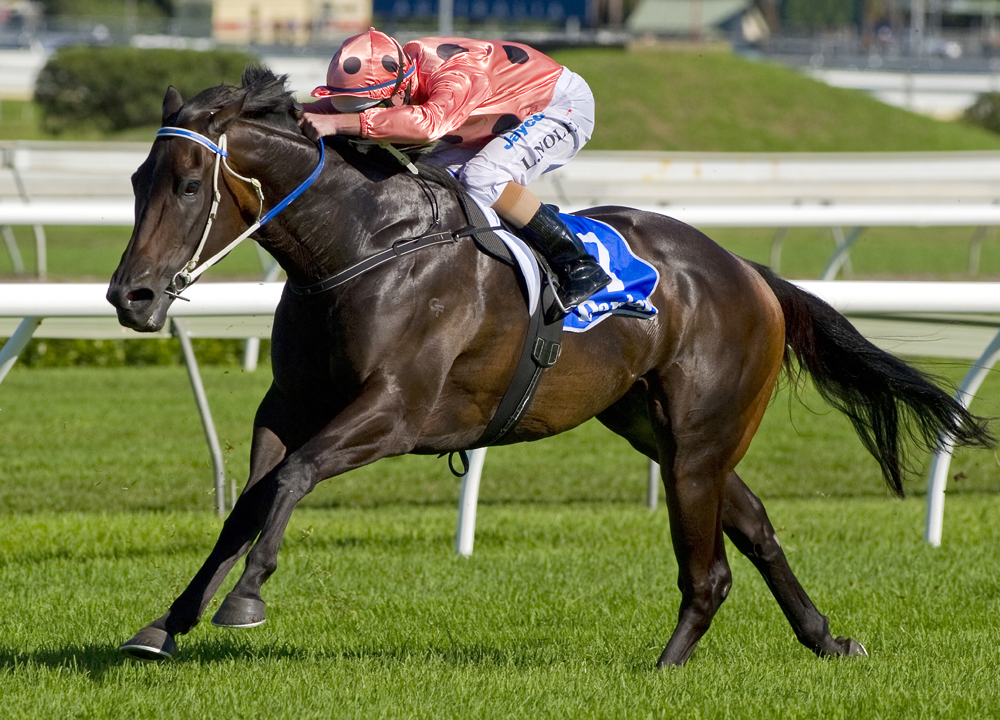 After easing to victory in the $500,000 Group 1 The Goodwood at Morphettville on May 12 this year, Black Caviar had earned $A5.75 million.

Moody said they had been a dream to train for. “They’ve had no reason to complain, but there are five families and a group of 130 people,” he says. “I actually commented on that [when Black Caviar bagged win number 20 to set an Australian metropolitan record, and went past American great Zenyatta’s 19].

“I’ve got no need to piss in their pocket, but collectively you’d expect that out of 130 people you’ve got to find somebody, a nark or some genius, that suggests we’re doing this wrong or that wrong. But they’ve just been an absolute dream.

“The real big positive out of them is they’re happy to share her with everyone else, which makes my job so much easier. They’re extremely proud of her and her achievements, but they’re happy to showcase her and her achievements with everyone else. That’s why she’s a people’s horse – they haven’t tried to keep her away or buried her and put the cloak and dagger on her.”

“The media frenzy around Black Caviar has been unbelievable;   it’s been bigger than Ben-Hur!”

While loving the limelight, they leave all decisions to their trainer, as usual spokesman Neil Werrett often says when interviewed. And he and the others are often interviewed.

There are, too, 100,000 reasons for Black Caviar to cap her career at Royal Ascot and in front of the Queen for her owners. This is the dollar figure believed to have been negotiated by Racing Victoria for industry racing station TVN (for ThoroughVision) to follow her career for a year for a TV special that, in the words of Racing Victoria’s Chief Executive Rob Hines, will document Black Caviar for history in a way that the career of Australia’s racing legend of the Great Depression, Phar Lap, wasn’t.

The bonus, separate from Ascot’s travel assistance, will help get the 130 to Ascot for the race on June 23 and the much-anticipated celebration.

Interest in Black Caviar long ago widened from the racing media to the media, period, and frenzy now is not too strong a word for it. Moody says: “It’s been unbelievable this whole thing and it’s just continued to evolve over her last ten runs. It’s been bigger than Ben-Hur!

“The amazing thing is it’s captured people far removed from racing. You get people at the Financial Review ringing up and doing stories on her, Woman’s Day, everyone… it’s amazing how she’s captured everyone’s imagination.” 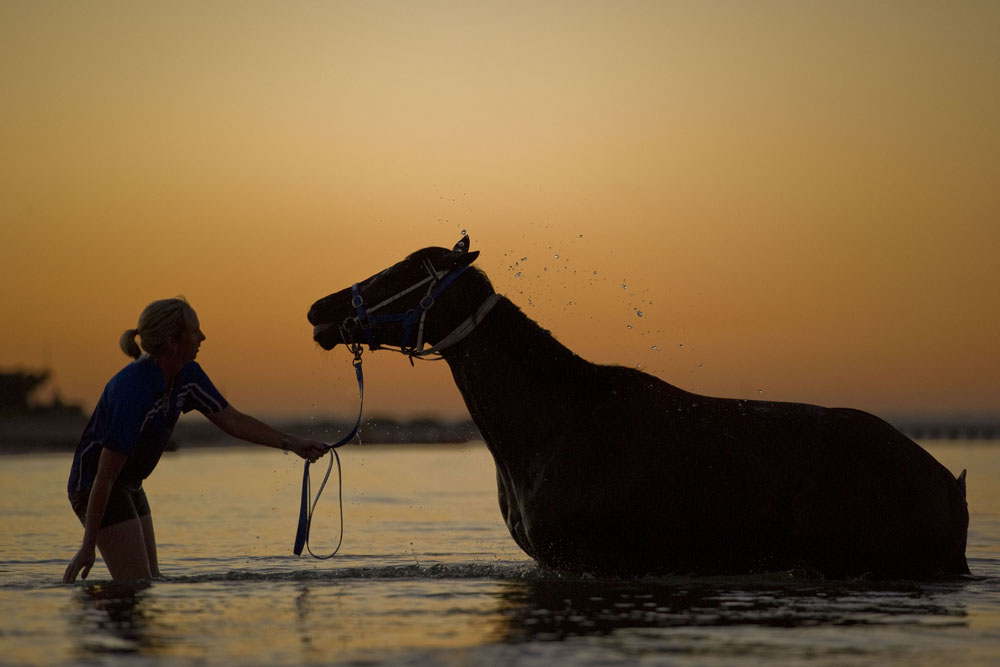 Black Caviar takes a dip at the beach

Black Caviar is ‘the people’s horse’, but this now-universal interest comes at a cost. Since the August start to this Australian season, the almost always affable Moody has largely restricted media access to a door-stop at his Caulfield stables on the Wednesday or Thursday before each race when, trackwork out of the way, strapper Donna Fisher brings the mare out for a minute or so of posed, stationary photos and Moody follows up with a brief press conference.

The trainer was physically exhausted after returning from Adelaide following Black Caviar’s record-breaking 20th win. With a workload he couldn’t jump over he initially turned down a request for interview, which took place before the great mare added win number 21 to her record, but agreed to talk in the Caulfield trainers’ tower as he instructs a constant stream of track riders, watching their work, listening to their reports, then repeating the process through a series of barrier trials.

Has he had an invitation to afternoon tea with the Queen at Royal Ascot? “No… it’s a non-smoking place, I think.”

He describes the royal meeting, especially the sprints that Australia does well in, as “our Olympics, I suppose”.

He says: “We all live the dream, but how often does it happen? Who would have thought we’d ever be shooting for 21? And all being well we’ll be shooting for 22 [in the Diamond Jubilee]. It’s unheard of, unparalleled.

“I don’t know what I’m feeling because no one else has ever felt it to give me some advice.”

When asked if he has a safety valve for when the Black Caviar circus gets too much, the trainer says: “I just pull up the shutters. I’m pretty black and white, there’s not much grey with me and when I’ve had enough I just let people know… people have got to respect the fact that we’re a big business.

“I’ve been a little disappointed this year my strike-rate’s slipped. We usually run at about a 20% strike-rate; we have, overall in Australia this year, maintained that but in metropolitan Melbourne we’re down to about 15%, which I’m not happy about.

“I’m not saying that Black Caviar is some way a reason. It might just be the quality of the young horses and that the older horses have met their mark, but I’d like a bit more time up my sleeve to overcome that.”

Manighar has proved there’s no substance to any one-trick pony jibe – the European stayer, revamped as an Australian middle-distance horse, won three Group 1 races in the autumn. And in 2009-10 multiple Group 1 winner Typhoon Tracy was Australian Horse of the Year, an award Black Caviar won last season. Then there’s the premierships and other marks that have come to Moody since he settled in Melbourne a decade ago when Amalfi won the 2001 Victoria Derby.

The road to Group 1 success ran through Moody’s work as a stablehand and foreman, and then running the Brisbane satellite stable of Bill Mitchell, who was based in Sydney. The Mitchell period, before Moody went out there on his own in 1998, brought a liking for Group 1 success with champion sprinter, and later sire, General Nediym.

Moody may not be from the city but neither is he ‘country dumb’. He is a city-smart trainer/businessman inside a country shell and his training knowledge is immense, built in the city on a strong country horseman’s base. The Hall Of Fame legend Tommy Smith, champion Sydney trainer for 33 years straight from the 1950s to the 80s, was just one of his mentors.

Businessman-breeder John Singleton, who has made a living out of saying outrageous things, said Moody would look a pillock in a morning suit and top hat at Royal Ascot.

Moody said the gear was part and parcel of the meeting – “I’ve been there and done that”, three times in actual fact. Two of Moody’s foreign trips were with Magnus, an Australian Group 1 winner, who was third in the King’s Stand to Miss Andretti in 2007 before failing in the Golden Jubilee and the Nunthorpe at York. In 2008 Magnus was eighth in the King’s Stand to Equiano, who just beat Takeover Target.

“I’ve got little interest in Royal Ascot to be honest… but, obviously, it does mean something”

The third raid, with Hinchinbrook last year, was aborted three days after Moody got to the UK when the horse strained a suspensory ligament just before the Golden Jubilee.

He has also had runners in Singapore and Hong Kong. Only last month he sent King’s Rose to Sha Tin for the Champions’ Mile (finishing unplaced) and she will also be at Royal Ascot to contest the Queen Anne Stakes, a handy companion for Black Caviar.

For security reasons, Moody was coy about transport and accommodation arrangements for Black Caviar, prepared to say only that she would be flown over early in June – a two-stop, 30-hour trip – and stay in Newmarket. The Victoria magazine Inside Racing reported that she will go to Mike de Kock’s yard at Abington Place, formerly occupied by Geoff Wragg.

The Black Caviar campaign is, according to Moody, a “whole different ball game”.

He says: “I hope it’s an enjoyable experience. I hope the press don’t drive me mad. I have an obligation to promote Australian racing but within reason. I think I’ve done a pretty fair job and gone out of my way a fair bit.”

Moody reveals the July Cup at Newmarket is on the agenda for Black Caviar but adds that he isn’t even thinking about it. “The July Cup’s the following race, but the Diamond Jubilee is the sole target.”

When, or if, that prize is won, will the Queensland beer Fourex be Moody’s drink of choice? “It is for me,” comes the reply. “I can’t speak for anyone else. But I’m sure there’ll be plenty of champagne drinkers there.” 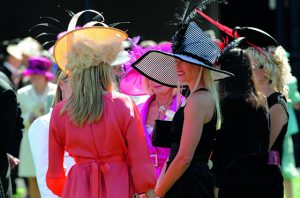 Up Next
The greatest show in town