The BHA has announced that Paul Bittar will stand down from his role as Chief Executive in early 2015.

05Described by Chairman Steve Harman as being “instrumental in building the foundations for racing’s future growth”, Bittar’s three years at the helm of the BHA have included the securing of a five-year funding agreement between the sport and Betfair to the tune of £40 million and the introduction of a zero-tolerance policy on the use of prohibited substances on racehorses.

Harman, who has engaged a team of head-hunters to find Bittar’s replacement, said: “On my arrival in summer 2013, I was delighted that Paul agreed to stay on until early 2015, and by having planned this timing we are in a good position with simultaneous developments with the BHA Board, Shareholders, Executive team and the implementation of the industry’s growth strategy. The search for a new CEO has started and Paul’s successor will be announced in the autumn.

“Paul, supported by his team, will continue to work hard on some key objectives in 2014, including finalisation of the 2015 Fixture List, the current and forthcoming Government consultations on the Levy, and support to various aspects of the industry’s growth strategy.

“Paul is reviewing a number of options which he is considering for his next role, and I know he will make a big impact in whichever of the positions he chooses.”

Referring to a controversial period for British racing in 2013, during which time Godolphin trainer Mohammed Al Zarooni was banned from the sport for eight years for the use of anabolic steroids on horses in his care, Bittar commented: “Our primary role is the regulation of the sport, so arguably the greatest challenge the sport faced during this period followed the positive tests for anabolic steroids in horses trained by Mahmood Al Zarooni.

“The gravity of the case warranted swift and decisive action, and in years to come it may well be seen as the catalyst which led to a material change in how Racing around the world deals with the threat posed by the use of anabolic steroids. On this matter BHA has adopted, and I am sure it will maintain, a key leadership role in raising standards and seeking robust and rigorous international minimum standards.

“The outlook for British Racing is significantly more positive now than it was at the close of 2011 and I firmly believe that the reputation of BHA has also improved. We have created a platform from which the sport can really grow and thrive.

“I’m focused on supporting Steve and the Board in ensuring that we achieve a lot before I finish. The back half of 2014 sees finalising of the 2015 Fixture List, Government consultations on the offshore Levy and Levy reform, finalising of more formal and collaborative structures with our shareholders, and the next stages of the industry’s growth strategy to name a few. I look forward to continuing to work effectively with the Executive, Board and Shareholders on these subjects over my final six months.” 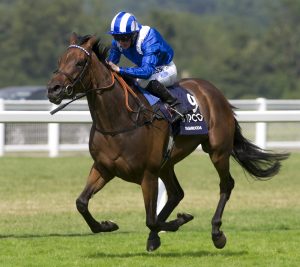 Up Next
Gosden closes in on second championship