The TBA stallion parade, which precedes Tattersalls’ February Sale at Park Paddocks, has become an established fixture in the bloodstock year. This year’s parade will be the biggest yet, with 15 stallions available for inspection. Nine of these are first-season sires, for whom the opportunity to impress breeders with their physique is particularly important.

The show begins at 10am on Thursday, February 5, with each stallion set to parade in the auditorium, and commentary provided by TBA NGC stalwarts Matt Prior and Gina Harding. The stallions will be available for closer inspection afterwards as they will be stabled in the Further Paddock, where breeders will have the opportunity to discuss the horses their connections.

The TBA will be offering refreshments to members and their guests in its new hospitality area in the Sale Ring Bar.

Of the nine first-season sires present, one is not strictly a new stallion: Darley’s Australian recruit Kuroshio has recently arrived in the UK after covering his first southern hemisphere book at Northwood Park Stud in Victoria. He was understandably popular there, having been one of the most precocious two-year-olds in Melbourne in the 2012/’13 season (when he twice scored at stakes level) before training on to win a Group Three weight-for-age race over 1000m at Moonee Valley as a spring three-year-old in September 2013.

Kuroshio comes to the parade from his European home at Overbury Stud, along with another horse with good Australian victories on this CV: Dunaden, winner of the Melbourne Cup in 2011 and the following year’s Caulfield Cup, and Group 1 Dubai Duty Free winner Cityscape, whose first foals are on the ground this year.

Another stud sending two stallions to the parade is Newsells Park, whose representatives are Mount Nelson and Equiano. These two will already be familiar to most observers, as are some of their offspring: Mount Nelson’s winners last year included Berkshire, Volume and Purr Along, while Equiano’s first batch of juveniles contained the Group 3 winner Dark Reckoning.

While Mount Nelson and Equiano have only a short run up the A505 to get to Park Paddocks from their home near Royston, the National Stud’s pair have an even shorter journey, Dick Turpin and Gregorian coming into town from their quarters alongside the July Course.

Dick Turpin, though, has already done his fair share of travelling recently, having just returned from a dual-hemisphere stint at Mungrup Stud in Western Australia, where this dual Group 1 winner has proved very popular. Gregorian, too, is a well-travelled horse, the fast son of Clodovil having made plenty of trips to the continent from John Gosden’s stable during his successful four-season racing career.

Another new young sire at the parade is Burwaaz, who is owned and managed by Will Barrons of Herringswell Manor Stud and is based in County Durham under Andrew Spalding’s care at Hedgeholme Stud. Having showed high-class two-year-old form when racing for Sheikh Hamdan al Maktoum, he is likely to find favour with breeders looking for a cost-effective way of producing precocious stock. Burwaaz’s placings in both the Gimcrack and the Flying Childers provide plenty of encouragement, as does his pedigree: the son of Exceed And Excel hails from the Irish Lass family which has churned out so many top-class winners for Kilfrush Stud.

Two more former Sheikh Hamdan colour-bearers at the parade are Albaasil and Heeraat. The former, who stands at Longdon Stud, recorded his best victory at Newmarket’s July Meeting in 2011 and now bids to enhance the reputation of Dansili as a sire of sires. Heeraat, a son of Dark Angel, did even better, relishing the fast ground to land a Group 3 sprint at Newbury as a four-year-old. He looks sure to sire some very fast horses from his base at Mickley Stud.

Similar comments apply to Swiss Spirit, who comes to the parade from Whitsbury Manor Stud, which historic property remains a rock-solid source of high-class sprinting stock.

Whitsbury Manor has been home to some terrific stallions in recent decades. The late Cadeaux Genereux was its patriarch for many years, having succeeded his own sire Young Generation. Compton Place is the stud’s current stalwart, while it unveiled a new star during the 2014 season in the shape of leading first-season sire Showcasing. Swiss Spirit, a son of Invincible Spirit from an excellent sprinting family, will bid to emulate Showcasing’s success when he has his first runners in 2017.

Bred and raced by Lordship, Swiss Spirit will be joined at the parade by another of the stud’s protégés: Sixties Icon, winner of the 2006 St Leger and based since 2009 at Norman Court Stud. By a Derby winner (Galileo) out of an Oaks winner (Love Divine), Sixties Icon is bred on the same formula which more recently has yielded Australia. His class is coming out in his offspring as he is already proven as a reliable sire of good winners of all ages across the distance spectrum.

The other son of Galileo at the parade is Sun Central, a Listed-winning half-brother to George Washington and Grandera. In his racing days he showed honesty and consistency in winning five of his 10 starts, and he should be a terrific flag-bearer for the burgeoning Elusive Bloodstock operation.

Another upwardly mobile concern is Bucklands Farm and Stud, which sends the former Aidan O’Brien-trained Coach House to the parade. Runner-up to No Nay Never in the Norfolk Stakes at Royal Ascot in 2013, Coach House showed both speed and precocity during his short racing career – which he was bred to do, being by Oasis Dream from the Group 3-winning sprinter Lesson In Humility.

Garswood, who makes the short trip across town to Park Paddocks from his base at Cheveley Park Stud, also possesses a lovely sprinting pedigree. He backed this up with some splendid performances on the track, most notably when taking the Group Two Lennox Stakes at Glorious Goodwood in 2013 and the Group 1 Prix Maurice de Gheest at Deauville last year. He is sure to attract plenty of interest at the parade – as will the other 14 sires available for inspection, all of whom have plenty to offer breeders. 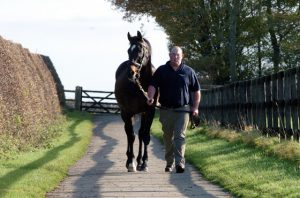 Up Next
Coming of age