How much weight has your 6ft frame put on since you retired from the Flat in 2004?

I was about 8st 10lb when I was race-riding and I’m about 15st now, so I have put on six and a half to seven stone. When I packed in riding the great thing was being able to eat what I wanted when I wanted, but nowadays it doesn’t really enter my head; it’s not something I dwell on.

Those hours of torment in the sauna, hot baths and dieting must seem a million miles away now. How do you reflect on your time in the saddle?

Nobody likes continuous saunas and sweating. But I’m really glad that I did ride and get as much out of the game as I did. It was a great time but my life now is what I would consider as normal and I’m much happier, which isn’t surprising when you consider that I was never eating properly. As a jockey you are in that little bubble where you think life is normal, but it’s not.

The odd time if I wasn’t riding on a Sunday I would have a meal on the Saturday night, but that would ruin my weight for a whole week. Nowadays I can enjoy going out and not having to worry about what I eat; no big deal to normal everyday people, I know, but when you have spent an important part of your life wasting and watching your diet it’s a big plus. Believe me.

Do you ever regret your decision to quit riding at the age of 21?

At most, I think I might have been able to ride for one more season but certainly no more. If I’d tried to continue I’d probably have driven myself potty. So, no, I don’t have any regrets.

Would you like to see the minimum riding weight in Britain raised?

If the authorities raised the weights a couple of pounds the jockeys would almost certainly let their weight go up by a couple of pounds and still be struggling. When I was claiming 7lb off the minimum weight of 7st 10lb I would have to do 7st 3lb.

But then when I was claiming 5lb I would let my weight go up a couple of pounds because 7st 5lb was the minimum I had to do. Even though I was 2lb better off I still ended up facing the same struggle.

What other avenues did you pursue after you quit the jockey ranks?

I spent a few years riding out for Mark Johnston and later George and Ann Duffield. I was also breaking yearlings and doing a bit of pre-training for myself, and it was very satisfying seeing them develop, go into training and then race. The whole experience was fulfilling and whetted my appetite for training.

When I’ve been asked if I might have pursued another career, I always say it’s impossible to know because I’ve never been involved in anything other than racing. Stick to what you know best.

With over 60 winners in your first two seasons you must be delighted with how things are going. What has been the secret to your exceptional start?

If I had to pinpoint anything it would be having happy horses and keeping things simple. I try to get into the horses’ heads and it is very important to make sure they are happy within themselves.

I am a firm believer in keeping them to the same routine because they enjoy that, and when they are doing the same thing every day they know what to expect. They get used to a daily programme, knowing there is no threat of what they might have to do next.

But will you be able to step your business up another gear based at Carluke, just 20 minutes from Glasgow and miles from the major UK tracks?

We are fortunate because we are very close to the motorway and that takes a lot of the hassle out of the travelling. We’ll never be a 100-horse yard, but I can envisage us expanding from our current number of just short of 40 to 60 or 70 horses.

That is a realistic number as there are a lot of owners in Scotland. I plan our trips south carefully, so that I can send three or four horses together. That way, owners can share the cost.

What are the advantages of being one of only three Flat trainers in Scotland?

There is less competition. It’s certainly the case if you compare our situation with Yorkshire, where there are lots of trainers. We are cheaper than most of the trainers further south and I have owners from as far south as Essex. But it is always a question of what each owner wants.

A lot like to be able to come and see their horses every weekend, which they can do, while others are happy just to see them at the races.

Initially, it was all about getting winners on the board and winners attract new owners, which means more horses and hopefully even more success. I can send a bunch of horses south, perhaps to Lingfield and then on the way home they might call in at Wolverhampton.

It all takes plenty of careful planning. I would rarely travel a horse on its own, but one, to Wolves, would cost £250, which is very competitive.

As a jockey with Mark Johnston you won 285 races. How much influence has Johnston had on you as a trainer?

All the time I was at Mark’s it was as a jockey, but you don’t walk round with your eyes closed and the one thing that stood out was how simple he keeps things. He always had a fixed routine which seemed to work and that’s what I tend to do here. I loved my time there; Mark was very loyal to me and I got to ride a lot of nice horses.

It was a great place to work, always good fun but at the same time very professional. Everything was always done just right, nothing was ever missed. I’d like to think I am continuing in the same vein here.

You employ Joe Fanning as your number one rider. Why?

Joe was a tremendous help to me at Mark Johnston’s, giving me lifts to the races and plenty of advice, and we developed a great friendship. He was a big support and made a big difference to my life there.

One of his strengths is being in the right place at the right time in a race and he is a brilliant judge of pace. If the horse is good enough he will almost certainly win on it.

How did you initially become involved in racing?

I come from the Borders, where there is a lot of pony racing. I tried racing them and rode a few winners. During the October school holidays my Dad sent me to the nearest big Flat trainer for work experience. And that happened to be Mark Johnston at Middleham, where I was mucking out, riding out and dressing horses over. I loved it and when I left school I went back to Kingsley House and that was the start.

What was the highlight of your riding career and what has been your biggest moment as a trainer so far?

I really enjoyed winning a Group 1 in Germany on Yavana’s Pace purely because of his age. He was ten and I was only 19, and Mark had always been adamant he was capable of winning a Group 1. Other highlights were my two Royal Ascot winners, Helm Bank in the Chesham Stakes and Fantastic Love in the King George V Handicap.

As a trainer we had a great time last season with Stonefield Flyer, a homebred we broke here and who won at Newcastle before finishing second in the Windsor Castle at Royal Ascot.

Do you have big plans for the future?

I have just bought out the yard’s owner Gordon McDowall. Part of the changeover involves setting up a website and branding in the yard. I am sure this will help to promote the business. I have always been salaried so now what I earn will come through the results with the horses.

Of course there are pros and cons when branching out on your own, but in the end you have got to be your own man and go for it. 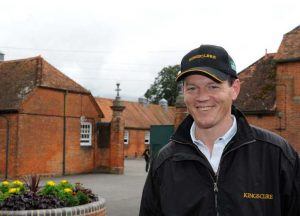 Up Next
Community pleasing