My Drogo maintained his unbeaten record over hurdles in fine style on Saturday with a fluent success in the Grade 2 bet365 Premier Novices’ Hurdle at Kelso.

The Dan Skelton-trained gelding was sent off the 2/1 favourite off the back of his win last time out over Soaring Glory in the Grade 2 Sky Bet Supreme Trial Novices’ Hurdle at Ascot and didn’t disappoint despite carrying a penalty, making smooth progress under Harry Skelton from back of the field to take it up two out and win going away from Do Your Job. At the line he had nine-and-a-half lengths to spare over his rival, who was in turn was the same distance clear of the third Castle Rushen.

My Drogo doesn’t hold any entries at the Cheltenham Festival, with connections likely to target Aintree’s Grand National meeting instead. Further down the line, Skelton views Richard Kelvin-Hughes’ gelding as an exciting chaser in the making.

“The plan for him is Aintree – he’ll have entries in the two-mile and two-and-a-half-mile races,” he said. “To do that under a Class 1 penalty is quite impressive. We don’t weigh our horses but if we did I’d say he’s probably a heavier, better horse than he was when he ran in a bumper at Cheltenham in the autumn. He’s come a long way since that day and hopefully he’s got a big future.”

The British-bred My Drogo is a son of Coolmore veteran Milan and was bred by H & C Group Ltd out of the high-class My Petra, a daughter of Midnight Legend who carried Kelvin-Hughes’ colours to victory in the 2008 Grade 2 Amlin 1965 Chase at Ascot. My Drogo is the best of three winners out of the mare. 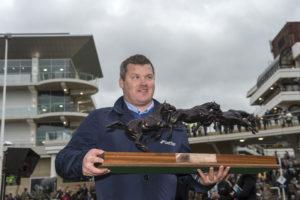