The BHA has hailed Chancellor George Osborne’s Budget speech as a “major boost” for racing, with the announcement of consultation on levy reforms, which could include offshore bookmakers being made to contribute to racing’s funding mechanism.

“Later in 2014 the government will go further and consult on wider levy reforms. This consultation will seek views on a range of options which are likely to include developing commercial arrangements, modernising the existing levy and a horserace betting right.”

The introduction of a ‘racing right’, under which bookmakers would have to pay for the right to bet on horseracing, was initially proposed as an alternative to the current levy system by Matt Hancock MP, whose West Suffolk constituency includes racing’s largest training and breeding centre, Newmarket.

BHA Chief Executive Paul Bittar was quick to welcome the Chancellor’s comments, saying: “British Racing today received a major boost in Chancellor George Osborne’s 2014 Budget Statement, with significant commitments from the Government for long overdue and fundamental reforms to the financing of an industry worth £3.45 billion annually to the British economy.

“Today’s announcement represents a major milestone in our efforts to secure the future finances of our industry. For too long we have sought a funding mechanism which reflects the nature of the modern racing and betting industries.

“Today’s commitment brings us considerably closer to achieving this goal, and securing the future prosperity of one of the country’s leading sports, and a major employer across the country.”

He added: “We look forward to engaging positively in both consultation processes, on Levy extension to offshore operators and wider Levy reform or replacement, in the coming months.” 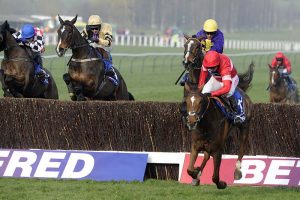 Up Next
Lord Windermere prevails in Gold Cup