The British Horseracing Authority revealed the findings of its whip review on Tuesday morning, with a package of recommendations including higher penalties for transgressions in big races and jockeys being restricted to using the whip in the backhand position only.

Launched in response to the Horse Welfare Board’s ‘A life well lived’ strategy document, a steering group was established to oversee the project, chaired by David Jones, and which featured representation from various stakeholders, including owners, trainers, jockeys, and World Horse Welfare.

Having found consensus that the whip should be retained for “encouragement”, a series of proposals were put forward – with 20 key recommendations – aimed at encouraging more judicious use of the whip in British racing. The proposals have now been ratified by the BHA Board, with implementation set for late autumn.

With regard to the number of times a jockey is permitted to use the whip, currently standing (and not amended) at seven strikes on the Flat and eight strikes over jumps, disqualification will be introduced when the levels are exceeded by four. Asked about why the level was set at four, Jones called this “the line in the sand”.

The BHA report states that “any disqualification decision should ideally be made by the stewards on the raceday,” though a new external review panel will have the power to change decisions if necessary.

With statistics showing that the whip rules are most likely to be broken in the bigger races where the rewards are significantly higher, penalties for offences will be more severe in the better-class contests.

In the new framework, suspensions for whip use above the permitted level in ‘major’ races will be double those for the same offence in ‘standard’ races. In the current rules, the definition of a non-standard or major race is based on a prize-money threshold.

This will now be broadened to include all Class 1 and Class 2 races in both codes (thereby covering all Group and Graded races, heritage handicaps, and major festival races), and any other race with a total prize find exceeding £27,500 for a Flat race or £20,000 for a jump race.

For example, if a jockey uses the whip three times above the permitted level on the Flat in a major race, he or she will be hit with a 14-day ban, twice the current number of seven days, while also receiving a financial sanction.

A jockey who exceeds the level of strikes by two in a major race will receive a ten-day ban (up from four) while going one strike over will see a six-day penalty (increased from two days).

The move to stop riders from using the whip in the forehand position could see a large section of the weighing room having to amend their styles. Leading jump jockey Tom Scudamore, a member of the steering group, estimated that he currently used the whip 70-30 favouring the forehand position against backhand.

Consensus in the steering group was forged around maintaining the current permitted frequency of use but restricting whip use for encouragement to the backhand position only. This was the preferred approach for the following reasons:

• It is more difficult, though of course not impossible, to strike a horse with excessive force from the backhand position;
• The backhand discourages a wide arm action, which is not only neater and more stylish, but it also reduces the likelihood that the whip will be used with excessive force and/or from above shoulder height;
• The backhand is used effectively by many jockeys and is an action that all jockeys should be encouraged to learn, train for, and adopt;
• Use in the backhand only is a regulatory approach that is gaining traction internationally and which is expected to be adopted more widely in the future.

A few caveats around this change were applied:
• Use of the whip in the forehand position will continue to be permitted for safety purposes, provided the need for its use in this context is clear and unequivocal;
• Use of the whip down the horse’s shoulder is permitted only when both of the jockey’s hands remain on the reins. If the whip is used in the forehand with the hand off the reins, this will constitute misuse;
• The 2011 review noted that backhand whip use may increase the potential for the whip to be used on the horse in the incorrect place. This is a particular concern in relation to less experienced riders.

A ‘bedding-in period’ will be applied to enable jockeys to seek further training while new guidance will be required defining use of the whip for encouragement in the forehand position as misuse, for which an appropriate penalty will be applied.

“It is our view that, as a result of this process, we are continuing to evolve standards of whip use, through a regulatory approach that will be demonstrably and visibly fair in terms of what they ask of our horses and the spirit of fair sporting competition.

“It is inevitable that there will be those who think we have gone too far, and those who think we have not gone far enough. I ask only that the considerable expertise that has provided its input to this process, and the scale of the task in finding consensus across such a broad range of complex factors, be considered as part of any discussion about these proposals.

“It is a significant package of measures that we believe will stand the test of time.” 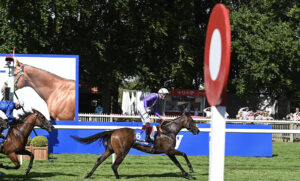 Up Next
Alcohol Free sprints to July Cup success