The British Horseracing Authority will not make any changes to the Rules of Racing in the wake of December’s High Court case that saw jockey Freddy Tylicki successful in his claim against former colleague Graham Gibbons.

Tylicki was trampled on after his fall from Nellie Deen in a mile fillies’ maiden on October 31, 2016. As a result of his injuries, he is now a permanent wheelchair user. Judge Karen Walden-Smith found in Tylicki’s favour, ruling that Gibbons “had a reckless disregard for Mr Tylicki’s safety”.

On Thursday afternoon, having reviewed the judge’s ruling, the BHA released a statement explaining “it is satisfied that the High Court has not identified any further actions that must be taken as a result of this ruling beyond those which have already taken place or are already committed to.”

The statement continues: “Work is already underway, following the adoption of the new Rules of Racing in 2019, to review British racing’s sanctions framework and guidance. This work will address the full range of sanctions, including those for interference, and discussions with stakeholders have already begun on this process.

“During the hearing, it was suggested that there exists an informal code of conduct, whereby jockeys do not ‘get too involved or [say] too much… try to stay as neutral as possible’ when giving evidence to stewards following a race. Evidence given by jockeys during enquiries is just one piece of the evidence stewards are required to carefully consider and weigh against all other evidential material. Experienced and trained stewards objectively undertake this task and make decisions based on the required standard at every fixture every day.

“The BHA is committed to furthering the professional development of all stewards in line with international best practice, enabling them to develop the skills required to hear, test, interrogate where appropriate, and balance all evidence given in enquiries.

“Away from stewarding, it is considered that there could be implications for jockeys’ insurance arising from this ruling, something the BHA and PJA have met to discuss.

“The BHA has committed to supporting the PJA in whatever way necessary in their discussions with their insurer, in particular by providing whatever material they may need to demonstrate the level of risk mitigation that is now in place in British racing. It is essential for all sectors of our sport that jockeys are provided with adequate cover to allow them to compete.

“Such risk mitigation includes the introduction of saliva testing in 2021, whereby oral swabs are used to provide on-the-day screening for cocaine and a range of other banned substances at racecourses. Over 900 saliva samples were taken in 2021.

“Saliva testing is designed to be used in addition to breath and urine testing, which is capable of detecting a broad range of substances. Raceday saliva and breath tests act as a preliminary screen, and any jockey who does not test negative on raceday is stood down from riding that day, as well as being subject to further investigation.

“Funding has also been made available by the Levy Board for hair sampling to become a mandatory element of any jockey’s licensing process in the future, as part of a widening of the matrices used to test for prohibited substances.” 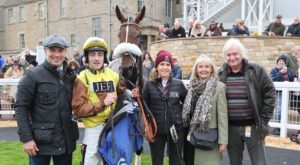