On the day that Philip Prince was banned for six months having tested positive for a metabolite of cocaine at Wolverhampton last year, the British Horseracing Authority has announced the development of a pilot project to test the saliva of jockeys at the races as a method of screening for banned substances.

The pilot, which is due to start in the spring, is being developed in conjunction with the Professional Jockeys Association and will use oral swabs to provide a near-instant indication as to whether substances are present in a rider’s system, above the existing thresholds.

Jockeys that test positive would be prevented from riding that day, as is the case with breathalyser tests for the presence of alcohol.

Brant Dunshea, Chief Regulatory Officer for the BHA, said: “This is an exciting and innovative proposal which could have a huge impact on our ability to protect the sport against individuals who are competing while under the influence of prohibited substances. We are pleased to be working with the PJA on its development.

“We hope that the use of on-the-day screening, alongside increased testing capacity, will provide greater deterrent to potential offenders and greater reassurance to riders that they are competing in a safe environment, should the pilot be successful.

“There is much more to tackling issues such as substance use than pure regulation. The BHA is also working with the PJA to take a wider look at this issue and how we can better educate and protect our participants and rehabilitate those who do become involved.

“We want to encourage a culture of openness within our sport. We want people to have confidence to come forward and speak up about all issues around health and wellbeing, and will seek to support anyone who faces problems or has found themselves in difficulty.

“We would encourage anyone who is involved with issues around substance use, or know of someone who is, to contact the PJA or the BHA’s Chief Medical advisor Dr Jerry Hill directly, or contact the PJA’s confidential helpline and support network run by Sporting Chance.”

If the pilot project proves successful, British racing would become the first major sport in Britain to utilise on-the-day screening for banned substances through oral swabs. 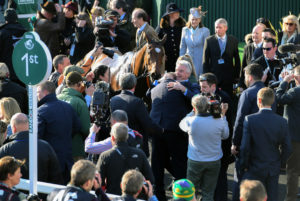