Britain will stage 1,496 race meetings in 2017, 14 more than this year and the most since 2010, after the first fixture list compiled under the Members Agreement – comprising the BHA, horsemen and racecourses – was revealed on August 1.

National Hunt supporters will see an additional eight fixtures, taking the number to 894, while there will be six extra Flat meetings making the total 602.

With six all-weather tracks now in operation following the addition of Newcastle’s Tapeta surface earlier this year, nine extra meetings will be held at these venues in 2017, the overall figure going up from 315 to 324, increasing the proportion of all-weather racing to 36.2% of the Flat programme.

In a move designed to boost the online betting sector, there will be year-round racing on Saturday evenings, 11 of which will be run under the floodlights during the winter.

On Good Friday there will be three fixtures, as Newcastle and Bath will race alongside All-Weather Finals Day at Lingfield.

Nick Rust, Chief Executive of the BHA, said: “We have always said that the formation of the Members Agreement would be the catalyst for the start of meaningful change to the fixture list. We have developed a fixture list that meets a diverse range of objectives and provides benefits to all stakeholders. While there will also be a need for trade-offs, the changes and improvements we have announced today are just the start of a longer-term plan to ensure our fixture list works the best it possibly can for our sport.

“The industry’s Executive Committee unanimously agreed the policy objectives for the 2017 fixture list and beyond. The committee felt that greater consideration should be given to how the list could better support the sport’s strategic objective to grow racing and betting, especially remote betting.”

Flat Novice and Maiden programme
The BHA has also announced the results of their two-year-old novice and maiden race programme, which was trialled during the first half of this season.

The programme was intended to provide an improved programme for juveniles, some key priorities being to get winners to run more often and reducing the number of small-field sizes. It follows a long-term concern that two-year-olds who win in the early part of the season have few opportunities to assist them going forward with their development.

Although the programme met with some scepticism, the findings provide an encouraging picture. In terms of the objective to incentivise winners to run more often, figures show that in 2016 to date, a total of 75 previous winners ran again, a 53% increase on last year, which saw only 35 juveniles run again.

The average starting price of both the favourite and the winner was noticeably increased across both maiden and novice races.

Richard Wayman, Chief Operating Officer at the BHA, said: “The fact that in 2016, under the new system, we have seen 40 extra horses who won in the first half of the season reappear in another race, provides a clear indication that progress has been made.

“It was important that this step forward was achieved without a reduction in the competitiveness of two-year-old races and the statistics show that, on the whole, the races worked well, with more races attracting at least eight runners and the average starting price of the favourite lengthening in both maiden and novice races.

“It is early stages yet and large-scale changes such as this should always be given time to bed in before any conclusions are made, so we will continue to monitor the performance of these races in future years and, if necessary, make any changes, in communication with our stakeholders. The early signs, however, are promising.” 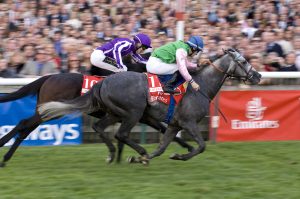 Up Next
Rouget dining at the top table