A sub-group of the Flat Pattern Committee has outlined the ‘best-case scenario plans’ for stakes races in Britain that could be staged if the sport is given the go-ahead to resume later this month.

If racing is allowed to restart, the QIPCO 1,000 and 2,000 Guineas would be held on the first weekend of June, while a number of races seen as most important by the group will be run on the weekends of May 23-24 and May 30-31.

The schedule would see the Craven Stakes, Nell Gwyn, Brigadier Gerard, Sagaro, Lockinge, Dante, Middleton Stakes and the Yorkshire Cup staged over the two weekends. It is likely that races would be restricted to domestic horses only.

Under the plan, Royal Ascot would still be scheduled to take place in its existing slot, beginning on June 16, with the Derby and Oaks to be held in early July.

An update released on Friday evening said: “Under our best-case scenario planning (and subject to advice from public health authorities), the aim is to rescue a number of lost Pattern and Listed events from the early part of the spring and stage them during the second half of May and early June if possible.

“Any other Pattern or Listed races that had previously been scheduled to take place before the end of May will be abandoned and not rescheduled.

“It is possible that the races listed below may not be staged at their traditional venues and may need to be hosted at alternative racecourses. Again, this is dependent on wider circumstances, the available fixtures and the public health guidance in place at the time.

“It is also likely that racing will be restricted to domestic (GB-trained) runners only, initially at least until May 30, in line with a similar approach taken by other international racing jurisdictions. France has confirmed that no foreign runners will be permitted until June 1; with Germany last night extending its restriction on foreign runners until at least May 31 (from May 22).

“We must emphasise that this provisional plan is based on our best-case scenario and may need to be adjusted according to when and under what circumstances racing is safely able to recommence.”

Provisional plan for the last two weekends in May

Provisional plan for the first weekend of June 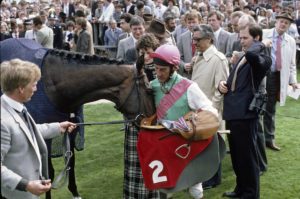 Up Next
George Selwyn’s 2,000 Guineas memories