All set for a blockbuster Saturday
Stories

Adam Beschizza’s American adventure goes from strength to strength and the jockey is looking forward to a book of 11 rides, including three Graded stakes mounts, at Fair Grounds in New Orleans on Saturday.

Beschizza made the move to America at the end of 2017 and has since enjoyed a notable run of success, including a Grade 3 victory on Mom’s On Strike in the 2018 Bewitch Stakes at Keeneland for trainer Joe Sharp.

Having finished second in the Fair Grounds jockeys’ table last year, Beschizza sits one winner behind James Graham on 39 winners in the current standings and could move top after this weekend’s racing.

Beschizza said: “Having 11 rides on a day at Fair Grounds on Saturday means you’re definitely going to be riding at least half a dozen decent horses.

“To have live shots in most of the races is definitely a plus when the card features a good handicap and some Graded stakes contests.”

Three of Beschizza’s rides on Saturday are for his long-term supporter Joe Sharp, the husband of former leading jockey Rosie Napravnik, and include Phat Man in the $150,000 Grade 3 Mineshaft Handicap (1m110y).

Of the five-year-old’s chances, Beschizza added: “Phat Man has been ultra-consistent, and he was a very good horse to me last year.

“He’s got to step up again for Saturday but I’m sure he’ll be knocking on the door. It wouldn’t surprise me if he went and won.

“He’s a gentleman of a horse. He has beautiful markings – dark chestnut, big white blaze and white socks.”

In the $150,000 Grade 3 Fair Grounds Handicap (1m1f), Beschizza is reunited with the Jack Sisterson-trained Bandua, who was formerly with Irish handler Dermot Weld. Having had a busy introduction to the American racing scene last year with runs in two Grade 1 contests, the Arlington Million and Canadian International, Beschizza believes Bandua has now acclimatised to the American way of life.

“He’s been on the track every day here,” he said. “He’s now switching leads like an American horse and while he has a wide post in the race, there seems to be some speed next to me in the wide gates.

“If he gets a good gallop then we’ll see the best of him.”

Beschizza said: “She’s only small but what she lacks in height she makes up for with a huge heart. She definitely looks to have a very live shot in the Rachel Alexandra Stakes and she’s coming off a layoff and there’s other horses in there who have had busy starts to the campaign.

“It’s a very tough little race as it is every year, but Oxy Lady is drawn in the middle and her style of racing will suit the race.”

Now used to the demands of American racing, Beschizza has noticed a distinct difference between the finances in owning racehorses in the USA and Britain.

“Racing in America is very much a business,” the jockey explained. “Although it is taken seriously back home in Britain, many owners aren’t profiting from what they are putting in.

“Owners can make money in America and therefore it’s more feasible for them to buy another horse and go again. The claiming game is so strong over here and you can almost drop a stakes horse into claiming company, with the only risk being that someone might claim him.

The decision to stay over here is paying off

“If the horse is not what it used to be, and an owner wants to move it on and buy something else, you can take them down a notch and do so. In Britain you could almost be stuck with a horse [with a high handicap rating] and not be able to move them on.”

More than a year on from his decision to make the move to America permanent, Beschizza is enjoying his riding more than ever and puts that down to now feeling at home in the USA.

He said: “When I first moved here it was like being an alien, the unknown body who was just trying to get everything set up for a new life, because basically starting again was very stressful in itself.

“Things are bedded in for me now and I can look forward and know where I’m going. The decision to stay over here is paying off.”

Joining Adam Beschizza at Fair Grounds on Saturday are fellow British jockeys Sophie Doyle, who takes the mount on Street Band in the Rachel Alexandra Stakes, and Jack Gilligan, set to ride Silver Dust in the Mineshaft Handicap and Sun Lover in the Fair Grounds Handicap.

The most valuable race on Saturday’s card is the $400,000 Grade 2 Risen Star Stakes for three-year-olds. The Mark Casse-trained War Of Will, winner of a Grade 3 contest over course and distance in January, is favourite but will need to defy a wide draw in stall 14. 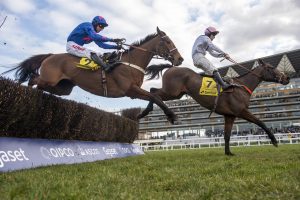 Up Next
All set for a blockbuster Saturday