Goffs are delighted to announce that Bernard Condren will be joining the Goffs UK team in the role of Head of Sales and will officially join the company on 7 February.

A well-known figure in the racing and breeding industry, Bernard began bid spotting at Goffs in 2000 and made his debut as an auctioneer at Goffs in 2006. He has since become a trusted member of the Goffs auctioneering panel, wielding the gavel at almost every sale since, and has knocked down many of Goffs’ leading graduates including Ribchester, Persuasive and Annie Power (in utero).

Bernard comes to Goffs UK following an 11-year career with Racing TV where he fulfilled the role of producer and presenter at yards, studs and racetracks throughout the UK, Ireland and major international meetings such as the Dubai World Cup Carnival.

Goffs UK Managing Director Tim Kent commented: “Bernard is a great fit for Goffs UK and we are delighted he has decided to join us in the role of Head of Sales. He brings a wealth of industry experience having worked with racecourses, owners, trainers and breeders in his role as auctioneer with Goffs and during his time at Racing TV.

“Bernard will continue to be on the rostrum at all Goffs sales whilst also becoming a full-time auctioneer at the Goffs UK’s sales in Doncaster, Aintree and Yorton. His role will also see him join the Goffs inspection team and liaise with Goffs’ agents to attract entries to the Group’s sales across both codes.”

Bernard commented on his new position with Goffs: “I have worked as part of the Goffs team for over 20 years now so I already feel like I’m part of the Goffs family. I feel I have come full circle since I began bid spotting in Ireland and I am really excited to be joining the business full-time. A key part of my role with Goffs will be Point-to-Point sales and I am looking forward to working closely with our agents Derek O’Connor, Michael Moore and Caroline Kenneally as we continue to grow our P2P and NH sales. In addition, I have been keenly following the success of the Premier and Breeze Up Sales since I started with Goffs and I am really looking forward to working with vendors on both sides of the Irish sea to ensure that we deliver the very best results at all Goffs UK Sales.” 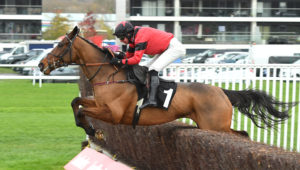 Up Next
Magical Moments: Carron and Bruce Wymer and Ahoy Senor