Gutsy Reel does it again
Stories

One of Flat racing’s most popular horses, Big Orange, battled on in warrior-like fashion to stave off Order Of St George and claim the Ascot Gold Cup on day three of Royal Ascot.

Attempting the two-mile-four-furlong trip for the first time, the six-year-old regained the early advantage under James Doyle after six furlongs with Quest For More and reigning St Leger-winner Harbour Law, second and third.

Meanwhile, Ryan Moore had favourite Order Of St George held up with only a few rivals behind.

Making the turn in, Big Orange still travelled kindly as Harbour Law moved up to his quarters. He kicked two lengths clear two furlongs out while the Ballydoyle hot-pot made significant headway down the wide outside.

The latter gradually ate into Big Oranges’ advantage inside the final furlong. He almost joined him in the last few strides but couldn’t quite get by losing out by a short-head at the winning post.

“Frankie’s a real star. He called me a couple of nights ago and I was probably on the phone for about 20 minutes getting instructions and him telling me all about the horse. He was spot on,” reflected Doyle.

“You can’t do it without the help of everyone. Frankie said to me ‘whatever you do, don’t interfere with him’. He knows what speed he wants to go at and you just sit as a passenger.”

Michael Bell’s charge enjoyed a fine 2016 and the gelding has taken his game to yet another level this time around.

His first success at Group 1 level, the son of Duke Of Marmalade set himself up for this with a five-length success in the Henry II Stakes at Sandown last month.

Bell said: “It feels epic, he’s a fantastic horse he gives his all he’s so brave.

“I’m not eloquent enough to praise him enough. I was concerned because Order Of St George is a very good horse but you know he’s going to lay his life on the line for you.”

Earlier in the afternoon, the Aidan O’Brien-trained Sioux Nation prevailed in the Group 2 Norfolk Stakes over five furlongs.

I’m not eloquent enough to praise him enough

Having raced with the group on the far side, the son of Scat Daddy ran on strongly inside the final furlong to score by half-a-length from Santry who led the bigger group towards the stands side.

John Gosden got himself on the scoreboard for the first time this week courtesy of his filly Coronet, who got up late to land the Group 2 Ribblesdale Stakes.

Switched out by Olivier Peslier just over a furlong out, she picked up well to collar the regally-bred Mori by a neck. 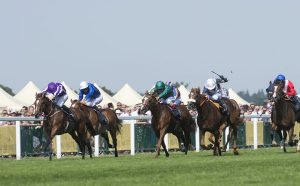 Up Next
Gutsy Reel does it again