Reflecting on a busy but rewarding time
Stories

In the tidal wave of delight that greeted Golden Horn’s Derby triumph, it would be easy to forget that Anthony Oppenheimer’s colt isn’t the only British-bred Classic winner of 2015. When Make Believe made all to take the Poule d’Essai des Poulains at Longchamp in May, he became the first Classic bulls-eye for Aston Mullins Stud. For a fairly small operation with 14 mares, started 12 years ago, it was a remarkable achievement.

“If we finished and ended there, are we happy? Delighted!” says Simon Hope, who owns Aston Mullins with his wife Mags. “But having tasted that, do we want more of it? Of course we do.”

Simon is, he says, “a white-collar farmer.” He is global head of capital markets for Savills and a board director of the property company, and he explains what he does with the same sparkling enthusiasm tempered with hard facts and steely reality with which he discusses his bloodstock business.

“Is there some sadness that we don’t still own her? Yes, but she’d had seven foals, and [at that stage] there had been one really good one [dual Grade 1 winner Dubawi Heights] and lots of rubbish,” says Simon. “Make Believe was a spanking colt, but if he hadn’t been bought by Prince Faisal, we wouldn’t have got more than 50,000gns for her. And we hit lucky; Rosie’s Posy’s dam, My Branch, was a very good mare, but lots of her offspring haven’t worked. We got lucky because Tante Rose [Rosie’s Posy’s Barathea half-sister] won a Group 1. And what works with that family is the Dubawi strain.” 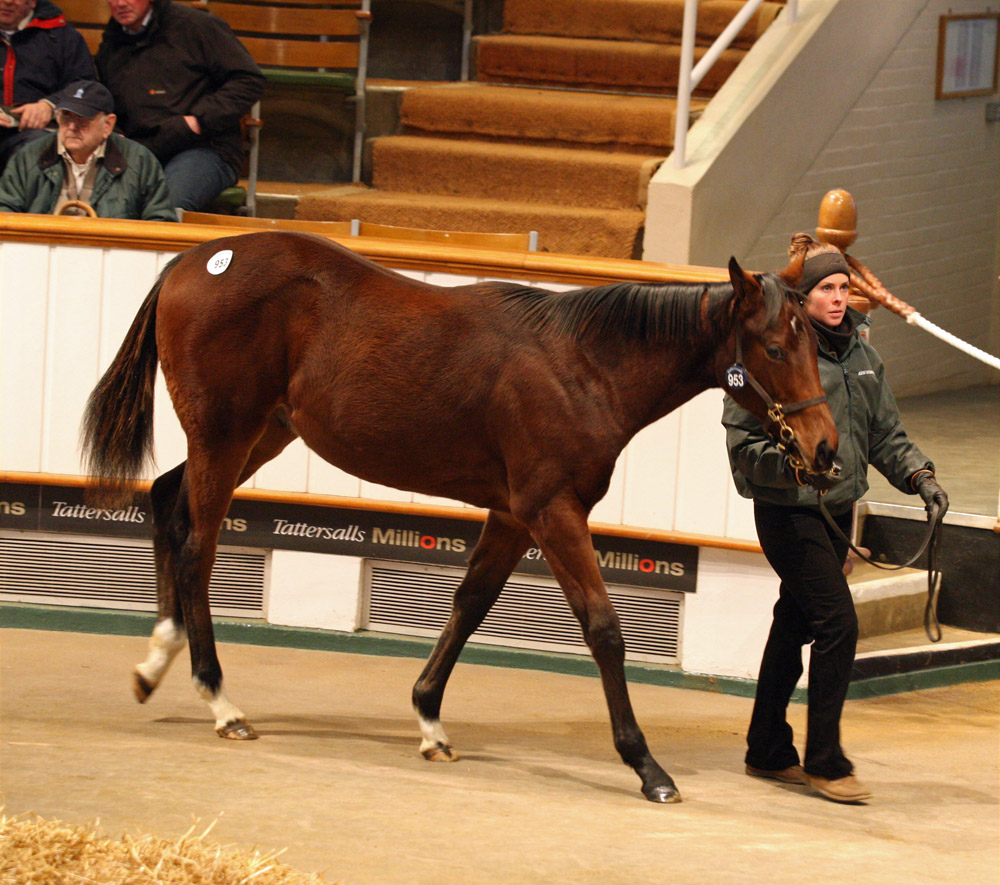 Simon, now 50, has, he says, always been “nuts on racing”. Brought up in Cheshire, he hunted and point-to-pointed and spent six months with Michael Dickinson after his A-Levels. While at the Royal Agricultural College in Cirencester, he rode out for people as diverse as Mark Usher and Criquette Head. Upon graduating, he got a job with Savills as assistant land agent for Sam Whitbread at Southill in Bedfordshire – as close as he could get to Newmarket.

“Four thousand a year, a load of logs and a cottage,” he says. “It was a great grounding, but the capitalist penny dropped that it doesn’t matter whether you are trading horses, diamonds, pork bellies or property – your fee is related to the value of what you trade. I worked out that I could be the best land agent that ever walked, but I was never going to be able to buy anything like this.”

In terms of breeding it’s pretty tough to get the place to function and make enough money to cover your costs, and that’s a challenge

“This” is the 300-plus acres of land near Aylesbury that comprises Aston Mullins.

He thought he lacked life experience, so went travelling, raking through around 25 countries.

“But before I went I said ‘I want to come back, and I’ll make the tea, but I want to trade buildings in London’.”

He adds: “If you want to do any good in an operation, you’ve got to get to HQ. There’s no point being a movie star in the Outer Hebrides.”

So began a highly successful career in commercial property.

“That’s what pays for this!” he says with a beaming smile. “This place is a dream for me. It’s an extension of working life, because in terms of breeding it’s pretty tough to get the place to function and make enough money to cover your costs, and that’s a challenge.”

The challenge involved in attempting to breed top-class horses, without spending like Imelda Marcos to do it, fascinates him.

“We like passion. People who work here are passionate, they’re very good at what they do, and we’re competitive. It’s a bit like hunting a fox, or closing a deal – there’s more fun in the rally than in the winning shot. Life is about pitting yourself against competition, market, misfortune…”

Mags is in charge of the day-to-day running of the stud, along with stud groom Courtney Prestage, who came to them from Lane’s End in Kentucky, and Romi Bettison, who is soon to return to South Africa. 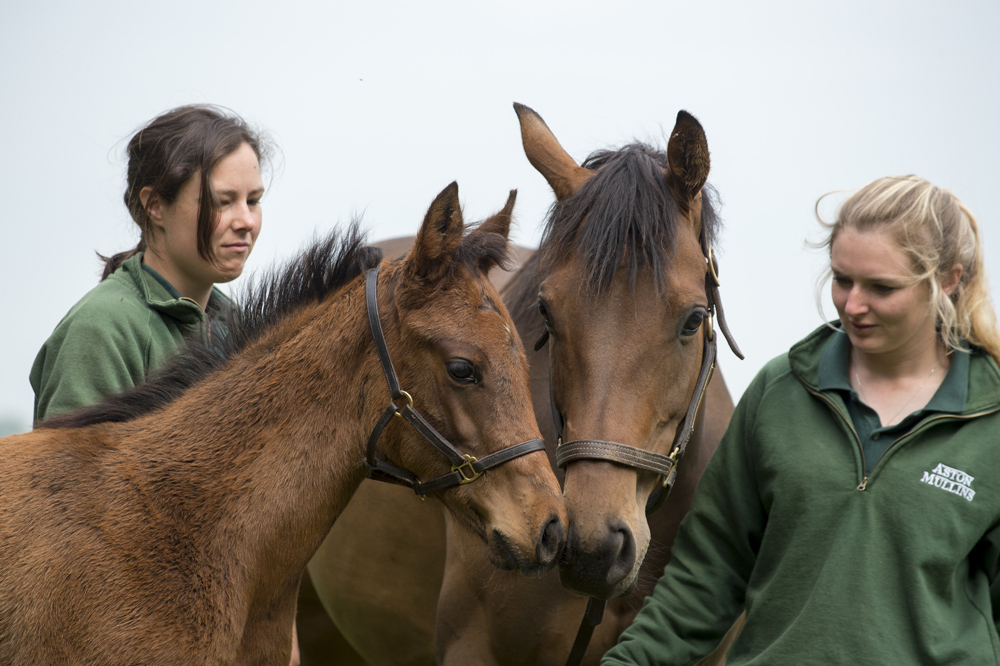 Hope for the future: Ighraa and her foal by Elusive Quality

“We extended ourselves massively to buy this place, but it was absolutely the right decision. I will be carried out of here in a box,” he declares.

He first saw the farm when he went to a party there.

“It was a great place with lots of land and very well located. But, although it had grown beef cattle and sheep, it had never grown horseflesh.”

It is also on Oxfordshire clay – not the limestone that horsemen swear is best for raising equines.

“Paul Thorman advised me to buy cheap, and make sure the farm grows bone. So we bought these foals, and not only did it grow bone, but we have never had any occurrences of OCD [osteochondritis dissecans] since we started.

“We try to weather everything out here, but when it comes to February time, we have a 30-40 acres field that is ridge and furrow – it is the lowest part of the farm, but you can walk across it in your slippers, and we put the mares down there and bring them up just before they foal.”

Aston Mullins tends to sell its stock as foals.

“It suits the farm, it suits us as a crop, and we pretty much always manage to empty the headcollar,” explains Simon. “Yes, there have been one or two cases where the pinhookers have made a ruck of money out of us, but they’ve always come back. They know we haven’t got veterinary issues, and they know our stock is for sale.”

“We used to use Jessica Foster, and she bought Rosie’s Posy on my instructions, but we’ve been with Richard for ten or so years now and he’s been very good for us.”

Simon, however, is not the sort of person to leave something as crucial as mating plans to anyone else.

He says with a laugh: “I irritate Richard like hell. It’s a bit like buying a property stock; you’ve got to look at the stats. One in 15 stallions is any good. The day you mate is the day you sell. In simple strokes, we use first-season or proven sires. As we get bigger, we can take risks on second or third-season stallions. But you’ve got to look through the lens of your customer. These are rich man’s toys, so they want fashion. Or they might want a particular family, because they’ve had a bit of luck with it. We bought a Street Cry filly from the family of Agnes World in the States and shipped her across to Deauville, and a family flew over from Tokyo to buy it.”

He continues: “You’ve got to look through the pinhookers’ eyes. The foal has got to look and walk like Cindy Crawford, and the pedigree has got to be fashionable.”

When it comes to mare purchases, Simon says that they tend not to pay more than 60-70,000gns.

“There is only one thing that you can control, which is cost.”

He says that Aston Mullins tends to buy good-looking mares with some recent black type in the family, but whom might have been average on the track or have an issue that is likely to put off potential purchasers, like being a weaver.

“For example, we bought a mare from Haras du Quesnay called Garanciere [an Anabaa half-sister to Fillies’ Mile winner Gloriosa], who was a provincial winner. We paid €52,000 for her – and she bites. She bit our vet when she foaled, and we now leave her to foal on her own.

“But her first foal was I Love Me, who won the Tattersalls Millions and was third in the Rockfel. Her second sadly died, and her third was [three-times winner] Ningara. We sold a sales-topper by Sea The Stars [155,000gns at Tattersalls last November] to Anthony Stroud, and she has a very nice High Chaparral colt at foot now.”

Of his current band of mares, the one he has most belief in at the moment is Ighraa. He bought the Tamayuz five-year-old, out of the Alzao mare Frond, at the end of her two-year-old season from Sheikh Hamdan for 34,000gns. He and his partner in her, Stephen Barrow – whom he met on the train – sent her to Francois-Henri Graffard in Chantilly, and she won a Listed race at Longchamp and finished fourth in the Princess Margaret Stakes.

A shot at the Del Mar Oaks didn’t come off, but Simon and Stephen sent her to Elusive Quality and, Simon says, she has a lovely colt foal by the Darley sire.

It was Stephen who introduced Simon to Clive Cox, for whom he has great respect as a trainer. Stephen and Simon have been partners in several horses they have raced, including Hope’N’Charity, who won a Listed race for them, and Don’t Forget Faith, second in the Sweet Solera Stakes.

“We only have fillies together – he had Reckless Abandon with another owner. We’ve bought a very pretty Acclamation filly called Musicora out of Richard Hannon’s yard. If we can just nick a bit of black type somewhere with her, we’ll bring her back here [to Aston Mullins],” says Simon. “Our farm would only race a filly. Going forward, if Ighraa, or Garanciere, or Cat O’ Nine Tails, who is a half-sister to Purr Along by Motivator, have fillies, we will race them if we don’t get the right sort of money for them at the sales.”

Cat O’ Nine Tails has a Champs Elysees filly foal, and has been back to Kyllachy this time. Garanciere has been covered by Charm Spirit, while Ighraa has gone to Iffraaj.

With a brain as sharp and bold as Simon Hope’s in the control tower, Aston Mullins is going to go ever-upwards. You can bet the bank on it. 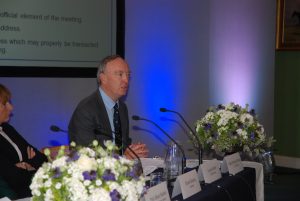 Up Next
Reflecting on a busy but rewarding time