The present Racehorse Owners Association was founded in 1945 but the first Association, long forgotten, was created 40 years earlier. Its brief, tempestuous history throws a revealing light on the attitudes of the Turf’s rulers in a society a world apart from today’s.

In May 1905, Lord Carnarvon submitted a memorial to the Jockey Club signed by about 400 owners and trainers.

The signatories were “of opinion that the expenses of taking horses to meetings are much greater than they ought to be (and) desire to ask that you will use your great influence to obtain a reduction in the following charges (a) carriage (b) charges for stabling of horses and lodging of boys at race meetings.”

The Jockey Club was like a python, slow and sleepy until threatened, then quick to crush any challenger to death. Disinclined to rouse itself at the first prod, Carnarvon was informed that railway charges were a matter “beyond the powers of the Stewards” but agreed to write to the Railway Companies Association “asking them to give the matter their careful consideration.”

As for stabling and lodging costs, the Stewards “thought it was a matter which could not be forced on any race company” and should be brought to the racecourses’ attention by “some body representing owners of horses rather than by the Stewards of the Jockey Club.” 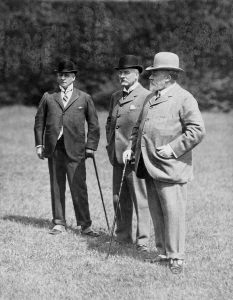 Carnarvon replied that a Provisional Committee had been set up, including prominent racing figures such as Lord Marcus Beresford, King Edward VII’s racing manager, Lord Hamilton of Dalzell, later a senior steward, William Bass of the brewery family and Washington Singer of the sewing machine family, who won that year’s St Leger with Challacombe.

Shortly afterwards, Francis Luscombe, the Association’s secretary, asked Weatherbys to put a notice in the Racing Calendar inviting subscriptions to the new body. The Stewards, their temperature rising, resolved to “refuse to allow the advertisement to be inserted in the Calendar.”

The Association’s protestations that they had no desire or intention to challenge the Club’s authority fell on stony ears. Arthur James, one of the Stewards, feared that if different individuals took over the Association it might “form a very serious and dangerous opposition to the Club”.

The Racehorse Owners’ Association was formally registered in October 1905 and the following year approached Sandown Park in search of free stabling and accommodation for staff. The racecourse refused and in June 1906 Lord Carnarvon, the ROA’s Chairman, told the Jockey Club that the Association had been informed “that the Sandown Park Company are receiving the support of the Stewards of the Jockey Club in their refusal to grant the concession of free stabling”. Carnarvon wanted to know if this was true and what line the Club proposed to take in future.

The Club’s line was a hostile one, exacerbated by a long letter from Lord Marcus Beresford complaining of the mismanagement of the Newmarket training grounds, which he alleged were run in “the financial interests of the Jockey Club to the detriment of the interests of owners of horses”.

Ignoring all Beresford’s many suggestions, the Stewards fired off an insultingly brief reply, concluding, “they do not see their way to making any alteration in the orders which govern the management of the Heath at the present time”.

Unfortunately for the Stewards, the King shared his racing adviser’s concerns and asked that a committee be set up to consider the matter, prompting a flurry of anxious correspondence. Lord Crewe, a former Senior Steward, told Lord Stanley, a current Steward: “I quite understand how previous events may have led up to a curt manner of answering [Beresford],” but, as Crewe informed Lord Harewood: “From what the King said to me in conversation, it is absolutely necessary to ease the situation in some way if a rupture between His Majesty and the Stewards is to be avoided.”

A compromise emerged. The Stewards agreed to meet Beresford to discuss his concerns and the King withdrew his request for a committee.
The Stewards claimed to have taken no part in the dispute between the ROA and Sandown Park beyond showing Hwfa Williams, the racecourse manager, a letter from them to the ROA declining to approve its formation and giving Williams permission to have the letter published in The Sportsman. It was a significant intervention, reflecting the Stewards’ apoplectic reaction to the new body.

The ROA’s response was to ask its members to refrain from entering their horses at Sandown, prompting a meeting of clerks of courses, which “strongly deprecated any interference of the ROA with the business conduct of meetings”.

Lord Durham, outspoken and often controversial, condemned “this very un-English method of boycotting Sandown.” He was not convinced that reducing the cost of ownership was necessarily a good thing. “If people who owned horses were put to no expense whatever,” he said, “any crossing-sweeper or chimney-sweep could constitute themselves owners of horses and obtain all sorts of privileges.” Durham would have spun in his grave at present-day syndicates.

In July 1906 the ROA wrote to emphasise that it “always recognised the Jockey Club as the only possible authority for the management and jurisdiction of matters connected with the Turf”. The Stewards replied, bluntly, that the Club “were unable to recognise the ROA and they must decline to have any further communication with you”.

At Doncaster’s St Leger meeting, Lord Hamilton of Dalzell and Lord Westbury, members of the ROA council, approached Colonel Baird, a Steward, who explained the terms on which the Stewards would agree to meet them. The terms were uncompromising. There must be no more boycotting of racecourses and if, after the meeting, the Club decided that the Association’s existence was detrimental to racing, Hamilton would call a meeting of the ROA and propose that it be abolished. Hamilton agreed.

Reporting back to the Jockey Club, Baird stated that he “hoped very soon to hear that the whole thing had been abolished.” Lord Stanley echoed his opinion. “The Association ought certainly to die,” he said, “and they did not wish to see any chance of such an Association being formed again.”

Although the ROA council included eminent figures, the Jockey Club, a bastion of elitism, chose to believe the worst of the Association’s members, said to number between 130 and 150. Baird claimed to have asked: “Have you got all these wretched little owners with one horse – publicans and every ruffian that owns a horse – do they belong to your Association?” Whatever the answer, Baird was convinced the ROA was composed of “the riff-raff of the Turf”.

In October, after meeting Hamilton and two other ROA representatives, the Stewards reiterated their refusal to recognise the Association but, if it was dissolved, offered to meet individual owners at each Newmarket meeting for the Stewards to consider suggestions previously submitted in writing.

It was not much to present to the ROA’s members and, the following spring, Hamilton told Baird that “there would be some difficulty in getting the Association to disband unless some further concessions were made by the Jockey Club”.

None appear to have been made but in July 1907, doubtless despairing of making progress in the face of the Club’s hostility, Hamilton and Westbury proposed that the ROA be dissolved.

Colonel Baird, a Steward, was convinced the ROA was composed of ‘the riff-raff of the Turf’

According to an imaginative report in The Sporting Times, the proposal provoked William Purefoy, a leading member of the Druid’s Lodge confederacy, to sing the American rebels’ song, “We won’t be reconstructed and we don’t care a damn”.

Beresford then jumped on to a table and directed the singing, after which Hamilton, Westbury, Bass and Captain J Orr Ewing immediately resigned from the council. The following year, Hamilton was elected to the Jockey Club, an unlikely event if he had remained to the fore in the ROA.

Shorn of some of its more distinguished members, the Association battled on but with little success. In October 1907, Beresford, Sir Harry Randall and Luscombe met managers of Associated Railways to ask that railway horseboxes be properly and systematically disinfected, that horses be transported more quickly, and that charges be reduced. The managers agreed to consider their request but it is not known if any action followed.

Finally, in February 1909, Luscombe, by then the ROA’s President, announced that ill health meant that he was no longer able to play an active role. “The members of the Association seem to me generally to have lost interest,” he wrote. “We have still a very fair list of members but hardly any workers.”

Useful work had been carried out, including efforts to achieve “the proper inspection of boxes used by horses when visiting race meetings; the proper cleansing of railway horseboxes and various improvements in the construction of the boxes where the yearlings stand at the Doncaster Sales”.

On April 26, 1909 an extraordinary general meeting resolved “that the ROA Ltd be wound up voluntarily”. 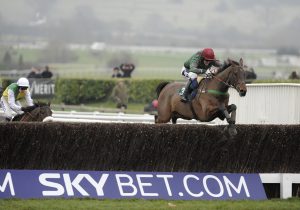 Up Next
Going for gold