Son of Mahler topped the rearranged Tattersalls Cheltenham Sale at £195,000 on Friday

Noel and Valerie Moran’s Bective Stud added another exciting recruit to their ranks when they went to £195,000 for eye-catching point-to-point winner American Mike at the Tattersalls Cheltenham April Sale held at Newmarket on Friday.

The four-year-old son of Mahler suggested he is a potential star in the making with a 20-length demolition of his rivals in a three-mile maiden point-to-point at Cork earlier this month for Sean Doyle of Monbeg Stables.

He has the pedigree to succeed in the National Hunt sphere as his dam is the Lord Americo mare American Jennie, who was trained by Michael Cullen to win four races including a Grade 3 mares’ novice chase at Limerick in 2005 as well as being placed in two Irish Grand Nationals.

It was Gordon Elliott, standing with Eddie O’Leary and Aidan O’Ryan, who signed the docket on behalf of Bective Stud having held off underbidder Dan Astbury.

Doyle, speaking to Racing Post Bloodstock, said: “He was a beautiful mover, a very well bought store and just did everything very simply.

“When we’ve got the job done, we need somewhere to show them off, so it was great to have the chance to do that as eventually we think this lad will be very good.

“Tattersalls made everything as easy as they could for us. Definitely going forward, for the store people, they’ll see results like this, and I’d say they’ll be a little more relieved. If we can keep moving, we can keep selling.”

The four-year-old son of Westerner had also landed a three-mile maiden point-to-point at Cork earlier this month and Cormac, brother of Sean, was delighted with the result.

He told Racing Post Bloodstock: “He’s a very settled horse, had always done everything right, but he was ready to go in February and we had nowhere to go so just kept him ticking over. With luck, the point-to-pointing came back just in time.

“You need a bit of luck but hopefully it’ll get back to normal by October. They do a great job watering in Ireland and after a bad year it’ll mean we can back to the store sales.”

“His half-brother topped the last sale, and he was a lovely big type. I think the reason Denis brought that lad was because this guy was showing a lot at home.

“He’s proved that on the track, and he stayed on well to win his race; they thought he’d be better back in distance and that’s a positive as well. He’s a fabulous mover, for his size even more so. It was a battle to get him, but we were happy to get him.” 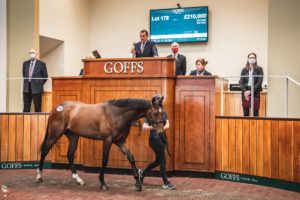